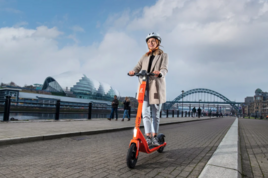 Neuron Mobility has reached over one million miles after operating e-scooter trials for over a year in Slough, Newcastle and Sunderland.

The news comes as all three councils confirm that the e-scooter trials will be extended until November 2022.

Since launching 12 months ago, Neuron’s e-scooters have been embraced by riders in Newcastle, Sunderland and Slough, with data from the company showing a million miles have been travelled.

According to a recent survey with riders using the service, 88% of them believe Neuron’s e- scooters have created a positive impact in their city.

Riders have found many reasons to use Neuron’s e-scooters over the year, from commuting and running errands to just taking in the sights of their town or city.

Notably, 35% of trips taken have directly replaced a car trip, saving an estimated 85 tonnes of CO2 in emissions.

Neuron has invested in safety messaging over the past 12 months by giving thousands of safety briefings at ScootSafe events with Neuron’s safety ambassadors engaging directly with residents to brief them on e-scooter safety.

This included the first of what will be an annual Helmet Safety Awareness Week in October, with £100,000 invested in incentivising helmet use and safe riding during the campaign.

Overall 30% of Neuron’s riders are women, significantly above standard industry figures of around 20%.

Feedback from female riders indicate that features of Neuron’s N3 e-scooter such as the wide footboard for stability and the ‘Follow my Ride’ feature that allows friends to track a users’ journey are popular with women but highlights there is still work to be done in attracting more women to use e-scooters.

George Symes, UK regional manager at Neuron Mobility, said: “We have learned a great deal during our first year operating in the UK. We have been really encouraged with the level of uptake and support for our e-scooters from the community.

“This has been underlined by the commitment of Newcastle, Sunderland and Slough to extend the scheme until November and we are looking forward to continuing to provide a safe and sustainable way for residents to get around over the course of the year.”

Cllr Ged Bell, portfolio holder for Transport at Newcastle Council said: “Taking part in an e-scooter trial was one of the actions in the city’s adopted Net Zero Action Plan and we are keen to understand further the role schemes like this may play in the future transport network of the city.

“We’ve seen many people benefiting from safe and responsible use of the e-scooters, with around half a million miles travelled by e-scooter in the city, and we are pleased that Neuron take action where there are instances of them being used in an anti-social and inappropriate manner.

“We will continue to monitor the impact of the trial, which is providing valuable information that could help inform future schemes of this nature.”

Spin, the micromobility unit of Ford Motor Company, has reached over 600,000 rides as part of its e-scooter trial across Essex.

The London e-scooter trials have reached over 500,000 trips and nearly one million miles since launch in June 2021.

Ginger and Qi Managed Services have launched a multi-vehicle micromobility dock and charge station in Middlesbrough.