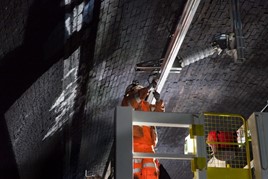 Network Rail has completed the electrified railway upgrades on the Severn Tunnel to link London and Cardiff.

It means for the first time ever an electric railway will run from Cardiff and Newport in south Wales, through the Severn Tunnel and all the way to London Paddington.

At 134-years-old and four miles in length, the Severn Tunnel has an extremely challenging environment, as over 14 million gallons of water are pumped out of it every day by Sudbrook pumping station to stop it from flooding.

Sudbrook pumping station is also set to be renewed as part of the upgrade of the Severn Tunnel, further improving the reliability of the railway.

Electrification to south Wales supports Welsh Government’s plans which includes a south Wales metro, an integrated transport system across the whole of Wales and a long-term vision for a Swansea Bay Metro.

Mark Langman, Network Rail’s managing director for Wales and Western said: “Electrification has reduced journey times between south Wales and London by as much as 15 minutes and provided an additional 15,000 weekday seats compared with a year ago, with the possibility of further increasing the number of services and seats from south Wales in the future.

“It has been a hugely complex task to electrify the tunnel but I’m thrilled that the final piece of the puzzle is now complete.”

A survey of more than 2500 rail passengers confirmed the overwhelming majority feel safe on trains and at stations.

A survey of Rail Freight Group (RFG) members highlights challenges facing rail freight sector – but offers hope recovery may not be as protracted as feared.

The Welsh Government will spend up to £65 million over the next six months to ensure train services continue to operate on the Wales and Borders network.