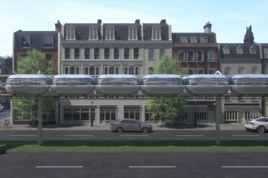 Urban.MASS has also developed its solar-powered Duo Rail track, which runs a rail system above ground level “to help traverse congested areas of urban centres at high speeds”. The pods can switch between rail, road and the Duo Track autonomously.

The company said this system would cost 50% less than existing light rail systems, with a 70% smaller footprint.

The pods can “flock” together into connected trains or run individually depending on demand.

The business has identified a number of UK cities it thinks is suitable for deployment, including Bristol, Liverpool, Cambridge, Oxford and Cardiff.

Urban.MASS chose Shildon for its first site due to its historic record of pioneering mass transit, having hosted the world's first steam-powered public railway in 1825.

It was also chosen due to its unique ability to demonstrate how Floc Duo Rail will navigate a number of obstacles, including a road bridge, existing railway line and public walkway, demonstrating the flexibility of the technology.

Kevin O’Grady, Urban.MASS chief executive, said: “Cities are changing like never before – populations are exploding but the way we move people around hasn’t changed in over a century.

“Victorian-era rail and road technologies weren’t designed for the demands of modern life and yet worldwide we continue to rely on the same basic, expensive, and carbon intensive system.

“We should be using solutions of the 21st century, to serve the new-breed of cities we see today – cities that are built for people, not polluting vehicles.”

Urban.MASS has plans to launch in Kampala, the capital of Uganda by 2030 and is in discussions with 10 other cities around the world.

Mind the gap: The future of mass transit systems

Given the critical importance of public transport in enabling accessible, equitable, and sustainable cities, AECOM’s Veronica Siranosian and Joe Seymour say proactive action is needed to support its long-term resiliency.

Swedish autonomous vehicle manufacturer Einride has launched the next generation of its electric and self-driving ‘Pod’.