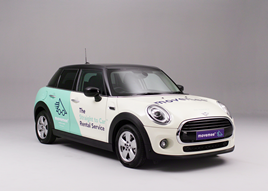 Move Mee, the car rental platform, has launched in nine locations in the UK following a pilot in Sweden earlier this year.

The British brand ran a pilot at Stockholm and Gothenburg airports in collaboration with rental franchise operator Green Motion in February, where it tested and evolved the service.

Move Mee expanded to 12 more locations in Sweden after the pilot and before launching in the UK.

Move Mee connects customers with vehicles sourced from dealerships or other rental operators that want to make their stock available on the platform.

Private car owners can also list their car as available for rent, as long as they meet the app’s requirements.

Richard Lowden, founder and co-CEO of Move Mee, said: “I am really pleased that we have been able to open nine key locations here in the UK, with further planned expansion of the service is already underway with the opening of additional downtown / metropolitan sites to be announced very soon.”

Shifting to sharing. Beate Kubitz from Travel Spirit looks at how to persuade people out of their own car and into shared car/bike schemes

Smart Transport Insight: The aspiration to own a car is not as widespread as in the past. This is just one example of a change in attitude towards travel, reports Beate Kubitz

Beate Kubitz assesses the potential of car clubs, bike-share and lift-share to offer a viable alternative to the single-occupancy car.

Shared mobility: Could electric and autonomous vehicles exacerbate the problems?