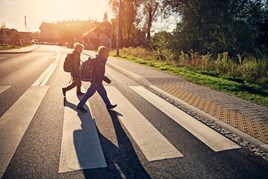 More than three million children across England are going to schools in areas exceeding World Health Organization (WHO) pollution limits, according to new analysis.

There are two main air pollutants of concern, based on their impact on human health: nitrogen dioxide (NO2) and particulate matter (PM2.5).

WHO pollution limits for PM2.5 are stricter than the legal standards and there have been calls for the Government to tighten the legal limits in its Environment Bill.

Previous research has found that poor air quality can stunt the growth of children’s lungs and worsens chronic illnesses, such as asthma, lung and heart disease.

Last year, a landmark inquest into the death of nine-year-old Ella Kissi-Debrah ruled air pollution was a "material factor" in causing and worsening the asthma attacks she suffered leading to her death.

The new analysis of national Government data (pre-pandemic), carried out by the mayor of London's office found children in London are four times more likely to go to school in areas with high levels pollution levels that exceed WHO limits, than children in the rest of England.

Measures are being taken to address poor quality in London with the expansion of the ultra low emission zone (ULEZ) this October.

The Mayor of London, Sadiq Khan, said: “For too long it has been accepted that children growing up in London will breathe more polluted air than their friends and family outside this great city. But I don’t accept this.

"I’m doing everything in my power to stop young Londoners breathing air so filthy that it damages their lungs and causes thousands of premature deaths every year. This is why I’m expanding the ultra low emission zone later this year.

“I want to make sure all of London meets the World Health Organization limits for particulate matter. But I can’t do it alone and I want to work with Government to achieve this goal.

"That’s why I’m asking for the new Environment Bill to include legally binding WHO recommended limits to be achieved by 2030. We can’t sleep walk from the health crisis of Covid back into complacency over the major impact of toxic air on everyone’s health.”

Responding to new analysis, Nick Bowes, chief executive of Centre for London said: "Raising children in London shouldn't damage their health but these shocking figures from City Hall show that it does.

"Successive mayors have promised to do more to tackle this crisis but London still exceeds legal air pollution limits many times over.

"Around half of air pollution comes from road transport, so we must find new ways to significantly reduce vehicle-related pollution.

"The expansion of the ultra low emission zone in the autumn will be a huge step, but City Hall could be bolder and adopt a pay-per-mile road user charging scheme which would deliver cleaner air, increase active travel and reduce congestion, as well as provide a substantial income stream to help plug Transport for London’s finances.

"London also needs more devolution so that it can tackle other sources of poor air quality beyond road vehicles.”

A number of Smart Transport members have written to Prime Minister Boris Johnson calling for tougher air pollution targets, after inquest into death of Ella Kissi-Debrah.