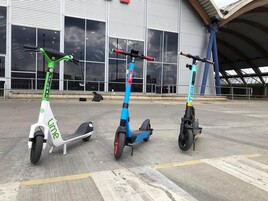 There were 484 casualties in accidents involving e-scooters in Great Britain last year, including one fatality, 128 seriously injured and 355 slightly injured, the Department for Transport (DfT) estimates.

Sales of e-scooters have soared recently, despite privately-owned e-scooters not being legal on public roads in the UK.

The Government has permitted trials of rental e-scooters in 32 areas in England and is expected to make a decision on legalising privately-owned scooters after the trials complete next year.

E-scooters have the potential to help the UK decarbonise transport but safety campaigners and disability groups are concerned about their misuse.

In publishing the statistics, the DfT acknowledges that e-scooters users are one of the vulnerable user groups as they are not protected by a vehicle body in the same way as car users are and tend to be harder for drivers to see on the road, making them particularly susceptible to injuries.

It said that of the 484 casualties in accidents involving e-scooters last year, 385 were e-scooter users.

The main other road users involved in e-scooter-related accidents were pedestrians and cyclists.

Most accidents in Greater London

The data also identifies an upward trend in casualties from April to December 2020. The peak time of day for incidents to occur is 6am to 3pm.

However, there are limitations with the data and DfT said that there might be a “considerable percentage” of non-fatal casualties that are not reported to the police.

Researchers at dashcam provider Nextbase recently estimated that e-scooters could be involved in up to 200,000 accidents by the end of 2021.

The data from the DfT is also limited by the fact that e-scooters are not one of the designated vehicles types on the STATS19 accident reporting form used by the police to record personal injury accidents on public roads.

This means they are classed as ‘other vehicle’ and can only be identified using a free text field.

The DfT said that it cannot yet “fully assess the quality of the e-scooter data captured in STATS19, in terms of consistency of recording practice for e-scooters across different police force areas”.

In future, e-scooters will be “better captured” as part of a new ‘powered personal transporter’ category, which will be introduced as part of the recent STATS19 review recommendations, the DfT said.

It is not currently possible to calculate casualty rates (per mile travelled) for e-scooter (as is done for other vehicle types) as there is a lack of data on distance travelled on e-scooters.

Some data will become available via the National Travel Survey in future years.

Helen Sharp, e-scooter trial lead at TfL, will be sharing the capital's experience of e-scooters and the lessons being learnt from its trial during a breakout session titled 'E-scooters: a micromobility solution?' at the Smart Transport Conference in London on November 30.

Paul Hodgins, CEO and co-founder of Smart Transport member and shared micromobility provider Ginger, will give an operator's perspective during the session.

Ginger launched the UK’s first pilot scheme with Tees Valley Combined Authority last year and is involved in a number of other trials in which it has introduced controls to overcome safety concerns.

David G Davies, executive director and Margaret Winchcomb, senior research and policy officer at the Parliamentary Advisory Council for Transport Safety (PACTS) will also be speaking during the session on PACTS' research on the use of private e-scooters.

All four speakers will take part in a panel debate, giving the audience the chance to put their questions to them.

To find out more or register for the conference, visit conference.smarttransport.org.uk.

The Government should legalise private and shared e-scooters and give Transport for London (TfL) the power to manage shared schemes, says Centre for London.