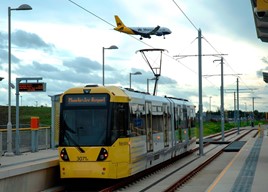 Metrolink has brought 'major benefits' to communities, clean air and congestion, according to a report by Transport for Greater Manchester (TfGM).

The evaluation report of Metrolink’s ‘phase 3’ expansion project has found that new lines have removed 38.8 million car kilometres per year from roads, which has contributed to a reduction in carbon emissions, saving 6,700 tonnes of CO2 in 2019/20.

The report also found, based on modelling, there has been an improvement in public transport access to employment, further education and healthcare.

The analysis showed that public transport door-to-door access has improved for the following proportions of the Greater Manchester population:

While pre-Covid-19 patronage had not reached the levels originally anticipated when the forecasts were prepared before the 2008 recession, the expansion has led to a doubling of trips made – from circa 20m in 2010 to 45.6m in 2019.

Last year, TfGM announced it would increase its Metrolink tram capacity by 15% to help provide more space for social distancing.

TfGM said that a major uplift in usage is possible when moving from a 'largely neglected' and 'low-level rail service' to a high-quality rapid transit system.

The circa £1.5bn programme brought new lines through local communities, with extensions to Rochdale via Oldham, Ashton-under-Lyne, East Didsbury and Manchester Airport delivered between 2010 and 2015.

Mayor of Greater Manchester, Andy Burnham, said: “Metrolink is a great example of what we can achieve when we have a locally run system that is accountable to, and delivered in the best interests of, our local communities.

“The study demonstrates the benefits Metrolink brings at both a regional and local level and is a good example of the Our Network vision in action: improving people’s quality of life, connecting communities, opening opportunity and revitalising our town centres and local economies, whilst making neighbourhoods cleaner, greener and healthier.

"We have huge ambitions for our city-region and Metrolink will be extremely important as we build back better from the pandemic and make Greater Manchester the best place to grow up, get on and get old.”

The report also highlighted benefits by businesses in terms of improved customer and labour force catchments, as well as opportunities for business travel.

Danny Vaughan, head of Metrolink at TfGM, said: “We have equally ambitious plans for the future, but our immediate focus is on supporting the region’s recovery.

“How and when people work is going to be fundamentally different but we will adapt to this changing demand to ensure people can continue to travel with us safely and confidently to access jobs, retail and leisure opportunities over the coming weeks and months.”

Mayor for Greater Manchester Andy Burnham will set out the transport priorities for the region at this year’s Virtual Smart Transport Conference.

TfGM to increase tram capacity by 15%

Transport for Greater Manchester (TfGM) is set to increase its Metrolink tram capacity by 15% to help provide more space for social distancing.