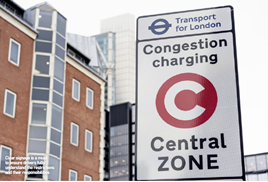 Non-residents of Greater London could be charged to drive into the city region if the Government does not agree to give the capital £500 million from vehicle excise duty (VED).

The finances of Transport for London (TfL) have been decimated after Covid-19 resulted in a collapse in ticket revenues.

The Government agreed a six-month £1.8 billion funding deal with TfL last month, with the suggestion the congestion charge zone could be expanded to north and south circulars taken of the table.

However, TfL officials have been asked to investigate the feasibility of a new Greater London Boundary Charge for non-residents which would apply only to vehicles registered outside London which are driven into the capital.

The Mayor of London, Sadiq Khan, says a charge could help manage congestion, with an estimated 1.3 million vehicle trips made from outside London into the capital every weekday.

Around one million of these trips are into outer London alone and the majority of these journeys are made by vehicles registered to addresses outside of the Greater London boundary.

Khan claims that these vehicle operators greatly benefit from using the capital’s roads without contributing to their upkeep.

Initial estimates suggest a scheme like the Greater London Boundary Charge for non-residents - if levied at £3.50 a day and applying only to non-Londoners - could reduce the total number of weekday car trips across the GLA boundary by 10-15% and raise around £500m a year.

The worst polluters could be charged more to encourage those who do need to drive to do so in the cleanest vehicles, resulting in further air quality benefits, says the Mayor.

However, in order to avoid the potential Greater London boundary charge, the Mayor has called on the Government to instead allow the capital to keep the £500m raised annually from VED charged to London-based drivers.

He claims this money raised is almost exclusively spent outside the capital, with TfL left to fund maintenance of major roads in Greater London from its fare-dominated income.

Khan explained: “Londoners pay £500m worth of vehicle excise duty every year, which is then spent on maintaining roads outside the capital.

“It is not fair on London that our drivers should subsidise the rest of the country’s roads and get nothing in return.

“The Government must allow London to retain its share of VED and to support the capital’s transport system properly as in other world cities.”

He said if ministers were not prepared to “play fair”, then he would need to consider other options, such as asking people who live outside London and make journeys into Greater London by car to pay a charge.

TfL’s feasibility study will need to establish whether such a scheme would be effective in delivering key existing policy objectives at the same time as providing essential income for London’s transport network.

Natalie Chapman, head of urban policy at Logistics UK, said: “A boundary charge would be a significant blow to the recovering logistics sector; it amounts to an additional tax on the businesses working hard to keep London stocked with the goods and services it needs to operate.

“While Logistics UK understands the troubled financial situation Transport for London is in, a boundary charge simply papers over the cracks – it is not a sustainable solution to its problems.

“We are calling for cool heads – both the Government and TfL need to work together to agree a long-term vision to fund the capital’s transport network.”

Khan says a public consultation process would be required before any charge could be introduced, in addition to economic, environmental and equality impact assessments.

An amendment to the Mayor’s Transport Strategy could also be required, subject to consultation.

Development of the scheme, consultation and implementation would take at least two years – meaning that any new charge would not be levied until after the capital’s recovery from the pandemic.

The Mayor’s move to begin examining the feasibility of a new charge comes as an independent review of TfL’s long-term future funding and financing options is published.

It found that this type of road-user charging could have benefits for Londoners – for example, reducing weekday traffic and emissions – and raise significant funds.

Commissioned by the Mayor and the TfL board in July, the review was carried out by an independent panel.

Rob Whitehead, director of strategic projects at Centre for London, said: “Given that the Mayor was charged by Government with devising a plan for putting Transport for London on a financially sustainable footing, without the need for a long term additional grant, it is unsurprising that this review concludes new charges are needed.

“TfL’s financial difficulties have arisen mainly because of its fare-dependent funding model, which has been hard hit by a loss of passengers this year.”

He argues that building on Centre for London’s proposals for London-wide road user charging, the proposal to create a cordon charge for vehicles around Greater London could help to secure the extra funding that TfL needs.

“It complements the Congestion Charge and the ULEZ, could be politically ‘sellable’, would raise substantial revenues, and should help to reduce congestion and pollution at a time when London’s roads are under unprecedented pressure,” he added.

“There is also a rough justice to the proposal. London drivers pay half a billion pounds to the Treasury every year in vehicle and fuel tax, with much of the money spent on the national road network, virtually none of which is in London. So it’s not unfair to ask those driving in from outside London to help pay for its transport infrastructure.

“That said, cordon-based schemes are a crude way of charging drivers for the contribution they make to congestion, pollution and road wear and tear.

“At some point the Mayor and TfL are going to have to bite the bullet and establish a distance-based road user charging scheme for London.”

Transport for London (TfL) and the Government have confirmed an agreed £825 million finance package to deliver the final phase of the Crossrail project.