Greater Manchester’s Mayor, Andy Burnham, has made the decision to take local control over buses as part of plans for an integrated transport network.

Greater Manchester will be the first city-region outside London to have buses under local control, he said, allowing local leaders to set routes, frequencies, fares and tickets.

By the end of 2025, this will allow Greater Manchester Combined Authority (GMCA) to fully integrate buses with the rest of the transport network, as part of a passenger-focused network with end-to-end journeys.

Transport for Greater Manchester (TfGM) says franchising will deliver passenger benefits including simpler fares and ticketing, with the ability to offer price capping for journeys across buses and trams, including a daily cap, and enable better joined-up planning between bus and tram journeys. It will also provide a ‘one-stop shop’ for travel information and customer support.

Franchising will be introduced in phases, with the first franchised buses starting to run in Bolton and Wigan in early 2023 and the move to a fully franchised system across the whole of Greater Manchester by the end of 2025.

In the period up to full transition, GMCA and TfGM will work with central government and bus operators to plan and improve bus services to best support Greater Manchester’s economic recovery.

The funding arrangements for the franchising scheme were approved by GMCA in November 2020 and total £134.5 million, including £78m of earn-back funding provided by central Govt as part of the devolution deal; £11m already raised by the existing Mayoral precept to date; £17.8m of one-off contributions raised by local authorities; and £22.7m of Mayoral precept from future years’ budgets – although the Mayoral precept will remain frozen in 2021-22

Burnham, said: “In Greater Manchester, we’ve always done things differently and been trailblazers especially in the field of transport; we had the first passenger railway; the first ‘bus’ route with a horse-drawn carriage and now I’ve decided that we will be the first outside London to run our buses differently – under local control, so that decisions are made at a local level for the benefit of our passengers.

“My decision will mean that we can integrate our buses as part of a joined-up network, so passengers can easily switch between different types of transport. It means simpler fares and ticketing with price capping, so no one pays more than they need to.

"It also means a ‘one-stop-shop’ for travel information and a single identity for the whole public transport network, which is attractive, clearly recognisable and easy for passengers to navigate and understand.

“Ultimately, this means a different way of moving around for everyone in our city-region, as we move towards Our Network; our ambition of a world-class, integrated transport network which can unlock opportunity for all; providing access to jobs and education, reducing pollution, attracting investment and reducing isolation.”

Following a transformational year for transport, the sector must now align investment and policy in response to ongoing decarbonisation ambitions, the need for more efficient living and better health, as well as changes brought about by the Covid-19 pandemic.

Join senior public and private sector transport leaders at the two-day Virtual Smart Transport Conference on June 8 and 9 to: 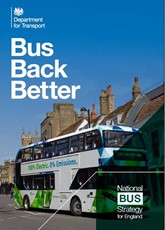 Latest Poll
What working practices is your organisation planning post-coronvarius?
Vote
View all