Three quarters of UK drivers are happy to share their vehicle data as long as their anonymity is maintained, according to Assurant’s Connected Decade report.

The majority of new cars are equipped with some degree of connectivity, often allowing drivers to gain access to particular services or in-car entertainment features, such as live traffic data or music streaming, in return for data sharing consent.

Sean Kent, UK client director, automotive, at Assurant, said: “As vehicles grow ever more complex in a data-connected ecosystem, consumers want a greater degree of protection and reassurance that their data and privacy are maintained. It is clear that enabling consumers to better understand the benefits of a connected lifestyle, alongside protecting data and making support more readily accessible, will help to increase trust overall. “

Among the respondents, 74% were comfortable with the technical status and operating health of their vehicles being shared, alongside three quarters of car users also responding positively to the sharing of data around external traffic, weather and road conditions.

Car users were, however, uncomfortable with the sharing of more vehicle-related personal data, as a result of the potentially higher risk of individual car users becoming identifiable through the data.

Risk caused as a result of location data was identified as a key area of concern, with nearly all (91%) respondents at least somewhat concerned about their car being hacked, and almost half (45%) uncomfortable with sharing their location in general.

Respondents also acknowledged feeling uncomfortable with sharing data around their driving ability, including usage of connected safety and convenience features, such as automatic parking assist and emergency braking. This applied to almost half of respondents surveyed.

When it came to the issue of data consent, 91% of respondents were at least ‘somewhat concerned’ about their data being shared without their explicit consent. 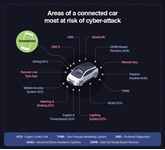