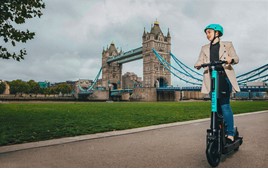 London’s rental e-scooter trial will begin on June 7 in a core group of boroughs, Canary Wharf and the City of London, with more areas expected to join as the trial progresses.

The boroughs participating in the trial include: Ealing; Hammersmith and Fulham; The Royal Borough of Kensington and Chelsea; and Richmond upon Thames.

Following the Government’s announcement last year to legalise rental trials of e-scooters run by local authorities, TfL and London Councils launched an open and competitive procurement process for the planned trial of an e-scooter rental scheme in London.

Operators Dott, Lime and Tier have been appointed to take part in the 12-month trial, where their ability to meet strict safety requirements and high operating standards was carefully considered.

Data shared by the operators will play a vital role in helping to shape London and the UK's future policy on e-scooters, including whether they could form part of London’s sustainable recovery from the coronavirus pandemic, said TfL.

Mayor Philip Glanville, chair of London Councils’ Transport and Environment Committee, said: “The rental e-scooter trial has the potential to support our city-wide response to the coronavirus pandemic and boost London’s green recovery.

“The trial’s chosen operators demonstrated a good understanding of London’s unique and diverse local communities and infrastructure and a willingness to work with the London boroughs participating in the trial on shared objectives.”

Canary Wharf and the City of London will be participating in the trial fully by providing parking, with further boroughs, including Tower Hamlets, acting as 'ride-through' areas, which users may travel through but not start or end e-scooter rides.

Between 60 and 150 e-scooters will be available to rent in each fully participating borough initially, with riders able to move freely across these boroughs and ‘ride-through’ areas.

Glanville said it will be important to see how the new service impacts London’s existing transport network and carbon emissions and how inclusive it is of the travel needs in the city. 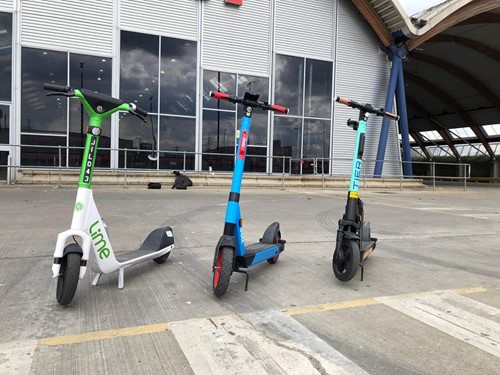 The rental e-scooters will require a maximum speed of 12.5mph, lights at the front and the rear of the vehicles that are always on throughout any rental and audible warning systems.

“Running the trial safely for all road users is vital. Boroughs will work with TfL, London Councils and operators to uphold the highest safety standards and take into account London’s most vulnerable residents, such as people with visual impairments," said Glanville.

Operators will have other safety mechanisms in place, including ‘first ride policies’ where riders will need to take an e-learning safety course before they hire for the first time.

Rental e-scooters will only be allowed to be used on roads and in cycleways - not on footways.

“Safety remains our number one priority and we will work closely with the e-scooter operators, London Councils and the boroughs to ensure rigorous standards are consistently met," said Helen Sharp, TfL’s e-scooter trial lead.

“We will also continue to work closely with all of our stakeholders, including TfL’s Independent Disability Advisory Group, to ensure that the trial meets the needs of everybody living in, working in and visiting the trial areas," she added.

Boroughs, Canary Wharf and the City of London will control parking locations for e-scooters providing marked designated bays, and geo-fencing technology will be a requirement for every rental e-scooter.

There will also be mandatory response times for operators in cases where vehicles have been improperly parked, are damaged or are causing an obstruction. Boroughs will also be able to specify ‘go-slow’ areas where the speed of e-scooters will be automatically limited to 8mph.

Operators that demonstrate strong performance and compliance may be able to increase the number of e-scooters in their fleet over the course of the trial, while those that do not may be required to reduce their numbers, TfL said.

Boroughs currently seeking participation in the trial include Lambeth and Southwark.

Transport for London (TfL) and London Councils have launched a competition to select up to three operators for a 12-month trial of rental e-scooters.

The Government has extended the end date of e-scooter trials until March 31, 2022, meaning it could be mid-2023 before any legislation permitting their use is introduced.