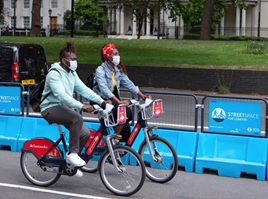 Transport for London (TfL) has seen the proportion of journeys made by walking or cycling increase to as much as 46% during the Covid-19 pandemic this year.

There was an upwards trajectory before the first lockdown, with an active travel share of 29% between January and March, but the period between April and June saw a 46% share.

The level did drop slightly to 37% between July and September, but it is still higher than pre-Covid levels.

Will Norman, London’s walking and cycling commissioner, said: “This new data fully encapsulates how the pandemic has transformed the way Londoners travel around our city.

“Many people enjoyed making the most of the quieter streets during lockdown and this change in habit has had lasting effects, with walking and cycling journeys continuing to be higher year-on-year.”

Norman said the Streetspace programme, which introduced temporary changes to create strategic cycle routes and extra space for walking in town centres, was key to supporting the shift to active travel modes.

He said: “Without the measures we have rapidly rolled out, the worrying increase in private transport, such as cars, may have been even higher which would be extremely damaging for our city.

“The second phase of our Streetspace programme will enable us to build even further on the increasing number of Londoners walking and cycling and help ensure a cleaner, greener recovery from the pandemic.”

Andrew Carter, Centre for Cities chief executive, said that while NO2 levels in London and other cities fell during the first lockdown, they rose again in the second part of the year as activity increased.

Carter said: “Vehicles are the biggest cause of NO2 so encouraging more people to walk, cycle and use public transport rather than drive will be essential in reducing emissions.”

Around 90km of new or upgraded cycle lanes have been built or are under construction across London as part of the first phase of the Streetspace programme.

The Streetspace programme has also reallocated 22,500 square metres of extra pavement space for people walking. In addition, 322 School Streets schemes have been delivered, more than 2,250 signal timings have been changed to prioritise people walking and six new Santander Cycles docking stations have been installed.

TfL is working closely with London’s boroughs on plans for the next phase of the Streetspace programme, which will help to sustain the recent increases in walking and cycling journeys.

Following the recent funding deal agreed with Government, TfL has committed to setting aside at least £75m on walking and cycling schemes across the capital over the next six months, with a further £20m from the Department for Transport’s Active Travel Fund set to be invested with the boroughs through TfL.

TfL has brought in changes to prioritise active travel at one of central London’s major thoroughfares.

Transport for London (TfL) is urging passengers to walk and cycle to try and ease the numbers returning to public transport as the second lockdown lifts today.