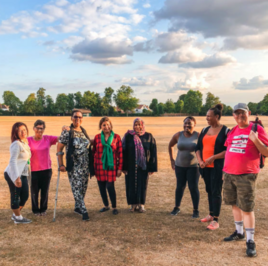 Living Streets, the UK charity for everyday walking, has been awarded €48,413 (£40,745) from the European Climate Foundation to develop a wholescale approach to diversity and inclusion within their campaigning network.

The additional funding will build on current Living Streets commitments by supporting diversity and inclusion within its Local Group network and campaigning.

It will also help Living Streets to develop conversations with marginalised communities most affected by air pollution, congestion and collisions, so that they can direct change.

Living Streets believes full representation across the organisation is critical and wants everyone to have a say in making the streets in their community better.

It says this approach seeks to bring underrepresented voices to the centre of its campaigning, as it is often these groups who are most adversely affected by poor streets.

Roberta Fusco, Living Streets interim director of policy and communications, said: “Too often people of colour, the elderly, disabled people, women, children and other marginalised people, are excluded from designing and planning our public spaces.

“And it is often these groups who are worst affected by poorly designed streets.

“Our aim is to ensure that underrepresented voices are heard across our organisation, so that we include those who are rarely included in decision-making, but are most impacted by what happens as a result.”

Fusco said Living Streets’ local campaigning approach will focus on “dismantling barriers to inclusion and co-creating a culture where no voices are side-lined when it comes to shaping street improvement”.

He added: “Walking and wheeling must be inclusive and our forthcoming programme of action will have this principle at its core.”

Living Streets has launched its five year strategy to set out its campaign priorities to boost active travel in the UK.