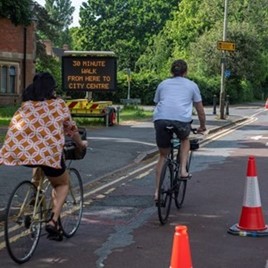 Leicester City Council has published a new document setting out how its transport system can best meet the challenges presented by the coronavirus pandemic.

The Leicester Covid-19 Transport Recovery Plan sets out planned actions for the coming months to create space for social distancing and safe travelling throughout the city, ranging from pop-up cycling and walking schemes to bringing forward infrastructure projects.

The recovery plan is based on three key principles:

The first phase of schemes under the Transport Recovery Plan has included new pop-up cycle tracks in Aylestone Road, Saffron Lane, London Road and Abbey Park Road, with more due to be installed including on Hinckley Road/Glenfield Road, and routes linking to business areas of Beaumont Leys, as well as more clearly segregating existing cycle lanes.

Pavement-widening is also due to take place to support businesses and shoppers in key local retail areas with Belgrave Road completed, and Queens Road, Narborough Road, Braunstone Gate and Green Lane planned, to enable shoppers to socially-distance as businesses gradually reopen with the easing of lockdown restrictions.

Work is also being done to prioritise walking and cycling in Pocklington’s Walk, by stopping traffic turning right from Belvoir Street to remove unnecessary through traffic in the city centre.

This week the Government has announced Leicester will receive £363,000 as the first funding allocation from a £250 million budget for Active Travel Emergency Funding, which will be used to finance these schemes.

Alongside this work, permanent schemes continue to be developed and installed, including those currently on-site at Belgrave Gate and Lancaster Road, as part of the ongoing Connecting Leicester work, which is also being accelerated.

The Transport Recovery Plan also sets out the approach being taken by the council and bus operators to ensure people who have to use public transport can do so safely.

Park and Ride services from Meynell’s Gorse and Enderby will recommence on June 1 to provide more bus capacity.

Leicester City Mayor Peter Soulsby said: “In terms of transport we have a once in a lifetime opportunity to change for the better people’s ways of travelling to encourage, safer, more sustainable transport choices for the future.

“As the city begins to return to some sort of normality, with businesses and schools gradually reopening, the Transport Recovery Plan sets out how we want to help the city move forward in a better way from the unprecedented obstacles we have all faced.”

In addition to the council’s pledge to continue its Bike Aid scheme to supply reconditioned and donated bicycles to key workers, the new Leicester Santander Bike Share scheme is also set to be launched this summer, allowing people to hire bikes from hubs across the city centre and other key areas.

The City Mayor last week announced the goal of creating a mile of cycling and walking routes every week for the next 10 weeks.

The routes will build upon the ongoing Connecting Leicester work to create a cycling and walking network connecting key areas of the city including shopping, business and tourist areas, hospitals, universities and development areas.

In Leicester around 40% of urban journeys are under two miles, and by providing additional safe routes the city council wants to encourage as many people as possible to walk and cycle rather than use a car.

During the lockdown, traffic in the city – and subsequent nitrogen dioxide emission levels – fell to about 50% of its previous volumes, with bus usage at about 17%.

Cycling increased in some outer areas of the city by between 170%, with walking also doubling on some routes.

The Leicester Transport Recovery Plan can be viewed here.

Transport for London (TfL) has confirmed that London's buses have begun returning to front-door boarding, with customers required to touch in with Oyster, contactless and concessionary cards.