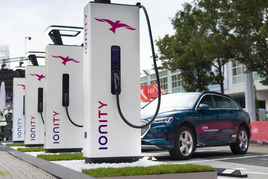 Manufacturers like Kia, Porsche and Audi have teamed up with other investors to increase the number of charging points in the network, with the goal of rapidly expanding to 7,000 points by 2025.

Jason Jeong, president at Kia Europe, said: “As we look towards the phasing out of new internal combustion engine (ICE) vehicles over the next ten years, it is essential that drivers have access to an expansive and reliable fast-charging infrastructure.

“Our further investment in Ionity will see a significant expansion of ultra-fast chargers across Europe that will support our vehicles' high voltage capabilities.

“As a result, more drivers than ever will be able to charge their vehicles quickly and easily for a seamless EV experience.”

Kia said the chargers will be placed at more ‘strategically key’ locations along the European motorway network and installed along trunk roads and near major cities.

In addition, existing charging sites located in areas that have high traffic levels will be upgraded with new charging points.

As part of the network expansion, Ionity will look to acquire more of its own properties and build and operate its own service stations.

The company recently unveiled ‘Oasis’, a concept designed to showcase what the charging experience of the future could look like.

The model featured charging stations that are covered from the weather elements and charging parks located alongside cafés, restaurants and shops.

Markus Duesmann, chairman of the Board of Management of AUDI AG, said: "We are transitioning our product range to electric cars in all of our core segments. This is a major change, but I see it as an even greater opportunity.

“More than ever before, it isn’t just the product that matters, but the entire ecosystem. With its focus on advancing and improving the charging network offering, Ionity’s massive expansion will play a key role in making electric vehicles more attractive.”

From December 2021, Audi will be offering a form of charging on the Ionity network known as 'Plug & Charge' (PnC), allowing users to charge an EV without an RFID (radio frequency identification) card or an app.

The authentication process takes place automatically at compatible charging stations via encrypted communication when the charging cable is connected to the vehicle, then the charging process starts.

Billing is handled automatically on the basis of a contract on file, said Audi.

Ionity shareholders also include a company from outside the automotive sector, financial investor BlackRock.