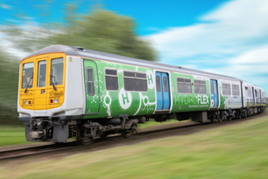 The HydroFLEX, which will be the UK’s first hydrogen-powered train, is being developed with industry partner and rail leasing provider Porterbrook.

HydroFLEX will also be the world’s first bi-mode electric hydrogen train. It will be undergoing mainline testing on the UK railway in the next few weeks.

Winning the FOAK 2020 programme marks an important step for the University and Porterbrook as it brings hydrogen trains one step closer to commercial operation on the UK railway.

Alex Burrows, director of University of Birmingham’s Birmingham Centre for Railway Research and Education, said: “I am really pleased that our HydroFLEX project has secured further Innovate UK funding to take its development closer to full commercialisation.

“To achieve decarbonisation of the railway we need to develop hydrogen technology, alongside electrification and batteries, as one of the means to get diesel trains off the network.”

Hydrogen, along with electrification and battery technology, is one of the three means for delivering a decarbonised railway.

The University is keen to continue its research in hydrogen - including application to rail -  in order to meet the Government’s decarbonisation agenda for the railway as well as enabling hydrogen powered trains to enter the UK transport market.

HydroFLEX launched at Rail Live in June 2019 where more than 500 people travelled by hydrogen power for the first time on the UK railway, including the chairman and chief executive of Network Rail, the Secretary of State for Transport and the Shadow Transport Secretary.

Minister of State for Transport Chris Heaton-Harris said: “The success of this trial in reducing harmful emissions underlines the importance of the First of a Kind competition, which funds pioneering projects to support better, more environmentally friendly rail journeys.

“Reducing the railway’s environmental impact and supporting decarbonisation is a priority for this Government. Harnessing innovation like this will be crucial in making our railways greener and cleaner in the future.”

A new report from the Centre for Policy Studies, a centre-right think tank, is urging Government to make sure sufficient progress is made to convert the UK heavy truck industry to hydrogen fuel.