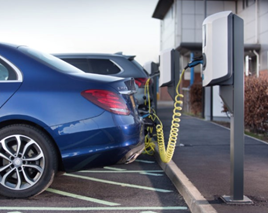 Ingenious has invested £750,000 through its Infrastructure Ventures EIS Service to help expand Elmtronics’ charging network across the UK.

The funding forms part of a £1.5m investment alongside the North East Venture Fund (NEVF), which is supported by the European Regional Development Fund and managed by Mercia.

The investment follows the announcement that the Government is to ban the sale of new petrol and diesel cars from 2030.

Elmtronics has developed its own software – Hubsta - which is installed on the charging points and measures customers’ electricity use, allowing them to manage their account and pay for charging services.

The charging company was was established in 2016 and it supplies and installs public charging stations as well as those for homes and businesses.

Its clients already include Nike, the NHS, National Grid, FedEx, Taylor Wimpey and a number of city councils.

“However, despite the growing popularity of EVs with consumers and fleet users, a lack of charging points continues to deter many from making the switch.

“This funding will allow us to step up our activity to help build the all-important infrastructure.

“We hope to make Elmtronics a key player in the roll-out.”

Tritium has launched a new charging solution that it says can scale up in power without the need to “rip and replace” existing hardware.

Electric Nation has installed the first 100 of its vehicle-to-grid (V2G) chargers to demonstrate how the technology can help solve network capacity issues.

Fiat Chrysler Automobiles (FCA) and Kaluza are working together to develop a range of sustainable and more cost effective services for its customers.