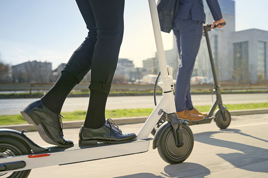 Of all collisions involving e-scooters, 309 included only one e-scooter with no other vehicles involved in the collision, compared to 83 in 2020.

There were also nine people killed in collisions involving e-scooters (all of whom were e-scooter riders) compared to 1 in 2020.

The DfT says its best estimate, after adjusting for changes in reporting by police, is that there were 390 seriously injured and 960 slightly injured casualties in 2021, this compares to 129 and 354 respectively, in 2020.

Jack Cousens, head of roads policy for the AA, said: “We are still learning about the type of incidents e-scooters are involved in as well as the kinds of injuries they create.

“While the number of collisions increased significantly from 2020, initial reporting shows that e-scooter riders are more likely to hurt themselves rather than others.

"Despite the fact e-scooters are only legal through rental schemes, some police forces have been collecting the type of owner.

“Interestingly, Nottinghamshire Police recorded more private e-scooter injuries compared to those in rental schemes which highlights the need to properly regulate e-scooter specifications before allowing them on our roads.”

The Government has confirmed its transport bill will include new rules to expand the legal use of e-scooters, despite growing safety concerns.