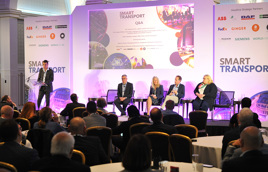 More than 30 experts from across the transport industry spoke at the Smart Transport Conference in Leeds earlier this month.

As part of their keynote speeches, Councillor Helen Hayden, executive member for infrastructure and climate, at Leeds City Council, and Councillor James Lewis, leader of Leeds City Council and deputy mayor of West Yorkshire, explained how measures were continuing to be introduced in the city and surrounding areas to cut pollution and encourage more active travel.

There is much work going on all across the North of England on decarbonising and improving transport, from local government, private companies and civil society, and from partnerships between them.

Councillor Hayden said: “We have a new transport strategy which aims to make Leeds a city where you don’t need a car. We’re not anti-car and we’re not saying that you can’t have a car.”

Councillor Lewis said the area had been dealt a blow last year when it was announced a full high-speed east-west line linking Manchester to Leeds would not be built.

He also said many rural areas in West Yorkshire face declining public transport so public and private sector must work together to overcome decarbonisation challenges.

“We have 2.3 million people in West Yorkshire and an economy of over £65 billion a year so we really are an essential part of a Northern Powerhouse,” he told delegates. “We are a collection of fiercely independent places, although we have been working together over the past decade to try and improve our economic performance and improve our transport network.

“Transport is one of the biggest emitters of carbon in West Yorkshire, but the solutions aren’t just going to be transport solutions, some will be digital and technical.”

Councillor Louise Gittins, vice chair of Transport for the North and Leader of the Council, Cheshire West and Chester Council, said: “We’ve got significant rural areas where are people are potentially excluded from transport and these areas are widely distributed across the north.”

She added that many households are “forced” into owning a car because there is no suitable public transport available or active travel alternative.

She said she “longed for the day” when local authorities shared the same devolved powers and the same amount of funding.

“We need to have parity across the North. Our residents don’t understand why in the Liverpool City region they’ve received a lot of money for their bus service improvement plan, and we didn’t get anything.”

The topic of place-based solutions was covered in another breakout session featuring speakers from the institute for Transport Studies, Transport for Greater Manchester and Liberty Global.

Rural mobility challenges, boosting confidence in public transport, getting creative with transport data, the future of urban and national logistics, transitioning to active travel solutions and electric vehicle and alternative fuel infrastructure were other sessions that proved extremely popular with delegates.

Keynote presentations were also delivered by Professor Sarah Sharples, chief scientific adviser at the Department for Transport (DfT) who explained how Britain’s world-leading record in data analytics and management can unlock new ways to meet the challenges facing transport innovation.

Professor Sharples told delegates: “Data can only achieve so much. We also need to have the right strategic approach and leadership in order to deliver the value of data.”

He said: “Our key focus in the Liverpool City Region is delivering a London-style transport network. That means really good-quality integrated transport which is truly sustainable.”

Councillor Robinson said its transport network would need to be as affordable as possible if people were to be persuaded to leave their cars at home.

“It’s not just because we want to get more bums on seats on trains and buses,” he added, “from our perspective the climate emergency is very acute. We have a pledge to be net zero carbon by 2040 or earlier.”

Councillor Robinson said it was only right that “London gets the investment that it gets” adding, “but we still lag behind London levels of investment in transport.”

Conference delegates also heard that an unprecedented number of local authorities are investigating the possibility of introducing a Workplace Parking Levy (WPL).

Speaking at breakout session on funding, Nigel Hallam, WPL service manager at Nottingham City Council, was asked if there was an increasing number of local authorities that are considering the workplace levy

He responded: “There’s unprecedented interest. We work with five local authorities already and I have heard from another 25 to 30. There’s also huge interest internationally.”

In his presentation, Hallam said prior to the WPL launching a WPL, congestion was costing the city of Nottingham around £160 million a year, with most of the cost borne by business.

Although the scheme met with a wall of opposition when first announced, Hallam and his team worked hard to reassure employers that every penny raised over the cost of running the scheme would be invested back into local transport.

Hallam told delegates: “People ask me, ‘if the WPA was that good, why is nobody else doing it?’ It was massively contentious then and it still is now. Our tram network took three and a half years to build, so we had massive disruption to parking and traffic throughout that time. And only after that was delivered and working could somebody start to evaluate the scheme.”

Since the levy’s introduction in October 2011, the city has raised almost £90 million in new revenue which in turn has “helped deliver massive inward investment”. The council has invested in public transport including tram, bus and railway station improvements.

Save the date: The next Smart Transport Conference will take place at etc.venues County Hall, London, on Tuesday, November 22.