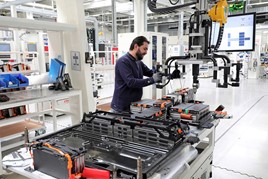 The House of Lords Science and Technology Committee is calling for evidence to inform its new inquiry into the role of battery and fuel cell technologies in achieving net zero greehouse gas emissions by 2050.

The committe says that these technologies will be crucial for achieving UK climate ambitions, particularly for the land transport sector where the number of battery-electric vehicles in the UK will need to increase from around 5% of current sales to 100% by 2032.

The committee is also seeking evidence on the role for battery and fuel cell technology in wider applications such as on the electricity grids.

"This must include sizeable increases in the manufacture of batteries and deployment of charging infrastructure.

"But there also must be advances in the energy density, capacity and charging times of battery systems, in parallel with further cost reduction.

"For heavy transport such as HGVs and trains, batteries and hydrogen fuel cells could also have an important role to play if some of these technical challenges can be overcome.

“As part of this important inquiry, the committee also seeks to understand the potential role for battery and fuel cell technologies in other sectors (for example aviation, agricultural machinery, heat production), and will consider how these technologies will interact with the wider energy system (for example, the use of batteries as energy storage on the electricity grid).

“We therefore welcome submissions of evidence on any of these areas to inform our inquiry.”

The call for evidence will be open until March 29.  Oral evidence sessions will start on Tuesday, March 9.

Focus areas for the inquiry and for submissions: