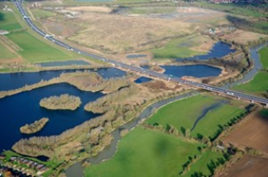 Motorways and major A-roads will get £14bn to help improve the quality, capacity and safety of the network.

Almost £11bn will also go into improving everyday journeys by repairing and replacing parts of the strategic road network which connects the country, largely built in the 1960s and 70s.

Highways England said the new investments lay the foundations for connected vehicles, digital traffic management and enabling two-way communications between roadside infrastructure and in-car devices that will revolutionise inter-modal transportation and personal and commercial mobility in the future.

Over the past five years Highways England has completed 36 major improvement schemes, including adding additional capacity on the M20 in Kent, the M6 in the Midlands and in Cheshire.

It said around 20 of the projects were opened ahead of schedule, including the recent opening of the £1.4bn project on the A14 between Cambridge and Huntingdon, which was delivered eight months early.

Jim O’Sullivan, Highways England chief executive (who will step down early next year), said:  “Our network is a vital part of everyone’s life. It has served the country well during the pandemic, keeping supermarket shelves stocked and enabling key workers to get where they need to be.

“Over the next five years we will increase capacity where it is most needed and continue to upgrade more of the network which has suffered from decades of under-investment.

“We now have a strong track record of delivering new schemes and operating the network for the benefit of our customers and the communities we serve.

"The plan we’re launching will protect and create jobs to aid the nation’s recovery, and make journeys faster and more reliable for freight and road users.”

The recent speech by Prime Minister Boris Johnson putting jobs and infrastructure at the centre of the economic growth strategy is welcome. But the challenge faced by industry is less about his stricture to build and more about action.

Highways England is searching for a new chief executive following Jim O’Sullivan’s decision to step down from the role early next year.