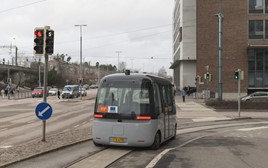 Sensible 4, the autonomous technology company, has started a pilot in Helsinki with three self-driving vehicles, an on-demand mobile app and a Remote Control Centre (RCC) for autonomous vehicles, to stress test the technology in an urban environment.

One of the aims of the  project is to gain experience from the complex traffic and real-world situations the pilot area offers and to test the whole self-driving value chain for the first time.

The 50-day pilot, which is part of the EU funded FABULOS project, aims to research the feasibilities of autonomous driving in a public transportation network.

The three different driverless vehicles, all equipped with Sensible 4’s autonomous driving software and technology, will be operating on the streets of Pasila in Helsinki.

The new business district of Pasila, close to the centre of Helsinki provides unique opportunities to test self-driving in an area with lots of complex traffic situations such as pedestrians, bicycles, trams and one of the city’s main train stations.

Usually, self-driving pilots are held in a restricted safe-zone – areas that offer few issues for the vehicles as possible.

“We will learn a lot during these 50 days of the Helsinki-pilot.”

Each car in the fleet has a different role in the project.

The autonomous shuttle bus GACHA – designed by MUJI – will pick up passengers from the bus stops on the predefined route.

At times, GACHA will stay dormant, and users can hail the shuttle with an application on their phones.

Now, due to the current coronavirus outbreak, the pilot will start without passengers for safety reasons. As soon as restrictions are eased, self-driving enthusiasts will be able to try the driverless shuttle and order it with their phone.

Besides GACHA, Chinese car maker-giant Dongfeng Motor Company has sent one of their vans to participate in the pilot.

The CM7 minibus has been retrofitted with Sensible 4 autonomous driving software.

The Finnish tech-startup has been cooperating with Swedish T-Engineering owned by Dongfeng.

Besides the CM7 and GACHA, a third vehicle by Sensible 4 is taking part in the operations.

The Renault Twizy will collect data aimed to improve the overall experience of the software and learn from the complex traffic situations.

The Remote Control Centre or RCC will have multiple video feeds sent from the autonomous vehicles.

As Sensible 4’s technology aims for Level 4 autonomy on a predefined route, a human operator may be needed to guide the vehicle past the rare occasions of a vehicle not being able to drive autonomously.

An example of such an event is a police officer overseeing the traffic instead of regular traffic lights, or a wrongly parked car on the route.

The California Department of Motor Vehicles has granted its first-ever permit for testing autonomous vehicles on public roads without a driver at the wheel.