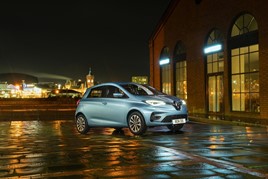 With large portions of the UK and Europe made up of suburban and rural areas, Renault said the findings from the project could be used to help inform how autonomous mobility might work.

The project consisted of two programmes located in a region to the south west of Paris: an on-demand Renault Zoe car sharing service between a train station and a business park, plus a separate shuttle service calling at key stops within the park.

Beginning in September 2017, an autonomous Zoe was used on an eight-mile (13km) round-trip, taking in a range of driving conditions and adapting to the demands of suburban and rural driving

Groupe Renault headed up the project alongside Rambouillet Territoires, in collaboration with 10 industrial and academic partners to share knowledge and expertise

The Tornado project’s technical focus was to define and develop autonomous driving solutions, and communication technologies and infrastructures, that maximise safety and address the specific requirements for suburban and rural areas.

From a safety aspect, everything from hardware and advanced software to embedded and remote solutions were taken into consideration, as well as vehicle-to-infrastructure communications.

Over the eight-mile stretch, tests were conducted on connected infrastructure components such as connected traffic lights and fixed cameras that enable vehicles to see objects beyond their field of perception.

For the Tornado project to work, people’s mobility habits in the area – and their views of autonomous vehicles – needed to be understood.

Their level of interest in the possibility of future autonomous transport services was also key, and how targeted, safe, shared and environmentally friendly mobility could complement existing setups in areas like Rambouillet.

Renault said connected infrastructure is key in keeping people moving in rural and suburban areas, and it’s something that’s expected to be convenient and appealing by those using it, which is why it was important to involve local authorities.

The community – consisting of around 100 people from the area’s MobiLab – were active in various stages of the project.

Numerous sessions of autonomous Zoe trials, and associated workshops, were aimed at studying how autonomous vehicles can be adopted, as well as monitoring the human factors regarding peoples’ feelings towards these new technologies.

From these shared experiences and real-life responses, the technical components could be upgraded or adapted as necessary to suit the expectations of the user community.

One of these changes, based on the feedback, was the operating speed of the autonomous Zoes that were in use.

In 2019 it could drive itself up to speeds of 31mph (50km/h), however because users expected the service to more closely match real-life driving and real-life speed limits, they can now drive up to 43mph (70km/h) along certain parts of the route.

The Tornado project was led by the Fonds Unique Interministeriel (FUI) for Regions, financed by Bpifrance and Ile-de-France, Auvergne-Rhone-Alpes and Occitanie regional authorities.

The Tornado project is one of several projects Renault has worked on to understand the complexities in the adoption of autonomous vehicles.

In 2019, a panel of around 100 people took part in the  – a public trial of an on-demand car service using two autonomous Zoe Cab prototypes.

The trial set out to understand how autonomous mobility services could be adopted by end users, and to test the technical aspects an on-demand mobility service would require.

Like the Tornado project, user feedback was key in understanding how autonomous mobility services would work in real life, with testimonials and data from the panel informing how the service can be adapted to better suit the needs of the people using it, and offer the best autonomous and shared mobility service in the future.

The vehicles used were during the daytime to move around the Paris-Saclay urban campus and for everyday mobility – going to one of the schools or laboratories on campus, head to lunch or play sports.

One of the vehicles was equipped with a large door on one side of the vehicle spanning the length of the interior, allowing easier access to the whole cabin.

On the other prototype, a large rear door on the passenger side allows access to rear seats and the rear-facing front passenger seat.

Groupe Renault is aiming to reduce its CO2 emissions by 50% compared to 2010 and is committed to achieving net zero by 2050.

Mayors, regional leaders and infrastructure providers need to prepare for the next phase of autonomous vehicle projects, according to Zenzic.