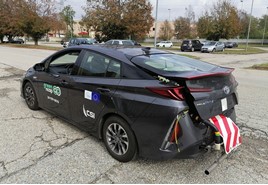 Green NCAP has published the results from its latest round of real-world emissions testing, which, for the first time, includes plug-in hybrid (PHEV) models.

The PHEV variants of the Toyota Prius, Kia Niro and Mitsubishi Outlander where among the models tested.

Green NCAP, which is part of the European safety programme Euro NCAP, said the tests revealed that not all plug-in hybrids offer the same environmental benefits.

The Toyota Prius (pictured) was awarded a four-star rating, with the Kia Niro following closely with 3.5 stars, but the Mitsubishi Outlander was given a two-star rating – less than some of the latest Euro 6 compliant petrol or diesel cars.

Niels Jacobsen, chairman of Euro NCAP, said: “The Outlander shows that a big, heavy vehicle with a limited driving range is unlikely to offer any benefit over a conventional car. On the other hand, Toyota, with its long experience of hybrid technology, has done a terrific job and the Prius, properly used, can offer clean, efficient transport.

“It depends on the implementation and hybridisation strategy but what is true of all PHEVs is that they need to be charged regularly and driven as much as possible on battery power if they are to fulfil their potential.”

In 2020, battery and plug-in hybrid electric cars together accounted for more than one in 10 registrations– up from around one in 30 in 2019, amid a turbulent year for the new car market.

Green NCAP buys used examples of each model and conducts tests both in laboratories and on the road to highlight vehicles that go above and beyond the required standards for type-approval.

Only two cars were given a five-star rating in the latest round of tests: the hydrogen-powered Hyundai Nexo and the fully electric VW ID3. 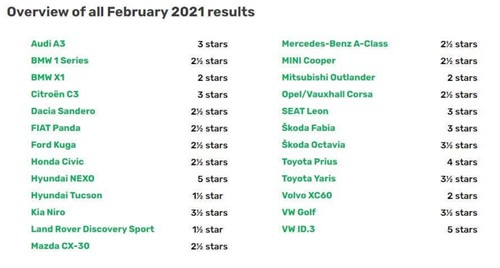