Government to go all electric with its vehicle fleet by 2027 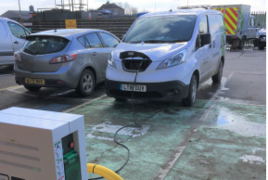 The Government has committed to switch all of its own vehicles to zero emissions by 2027.

The UK has joined nine national, regional, state and city-level governments in signing up to the ZEV Pledge, a newly launched initiative by The Climate Group.

The UK has gone further than other governments by making the switch as early as 2027, while other signatories like the US, Canada and Mexico will fully convert their fleets to zero emissions by 2040.

The ZEV Pledge is expected to collectively represent 121,355 vehicles on the road, with nearly a third of these being medium or heavy-duty vehicles.

Trudy Harrison, transport minister, said: “At the recent COP26 summit, the UK made a number of ambitious pledges to decarbonise transport and it’s only right that we in Government lead the way with our own fleet.

“We pledged a commitment in July to convert the Government’s car and van fleet to zero emission at the tailpipe by 2027, and I look forward to joining the rest of the country, and our counterparts across the globe, in the switch to electric vehicles as we accelerate towards a greener future.”

The announcement of the first signatories to the ZEV Pledge follows weeks after COP26, where the COP26 declaration on zero emission cars and vans was made.

Sandra Roling, head of transport at the Climate Group, said: “It’s essential we continue to build on the momentum for clean road transport following COP26, so I welcome the leadership we’re seeing today from governments who are putting their money where their mouth is when it comes to their own vehicles.

“More than half a billion vehicles on the road are owned or operated by governments, public sector organisations and businesses. There is huge potential to use this collective purchasing power to drive the auto market towards a cleaner future.

“While supportive policy is important for enabling a faster shift to zero emission vehicles, governments at all levels also have a responsibility to lead by example by decarbonising their fleets. We hope to see many more governments join the ZEV Pledge in the coming months."

Globally, fleet vehicles make up a quarter (24%) of vehicles on the road yet contribute to more than half (56%) of road transport emissions, according to the Climate Group.

Recent analysis by Climate Group and Systemiq found that faster electrification of fleets could deliver 'transformational benefits' for the climate, health and infrastructure, including saving the equivalent annual emissions of India by 2030 - the world’s third highest emitter.

The launch of the ZEV Pledge for public fleets follows the growth of Climate Group’s EV100 initiative, which focuses on building business demand for electric vehicles (EVs).

To date, 120 multinational companies are part of EV100, including BT Group, LeasePlan and Siemens. Altogether they have committed to transitioning more than 5.4 million light duty vehicles to electric by 2030.

As part of the commitment, more than 9,400 locations will also have charging infrastructure installed, said the Climate Group.

The Government wants to introduce a new zero emission vehicle mandate that will set targets for a percentage of vehicle sales to be zero emission each year from 2024.

Tevva has successfully raised £42 million in investment to rapidly scale up production in London of its new 7.5-tonne electric truck.