Government sets out £110m in rail and road funding projects 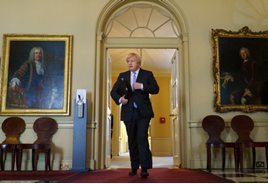 Prime Minister Boris Johnson has set out £110 million in road and rail upgrades across regions in England as part of his speech today (June 30) on the UK’s investment and economic recovery plans.

He confirmed over £100m has been set aside for 29 road schemes and projects ranging from fixing deteriorating roads and flood mitigation measures, through to repairing bridges that are part of local highway key routes.

Network Rail has also been awarded £10m to start the next stage of work to “unblock” Manchester’s railways.

The work will examine options to resolve capacity and reliability problems on the network.

This is the next step in the Government's programme to transform rail services in northern England following the nationalisation of Northern Rail in March.

Johnson said: "We are preparing now slowly and cautiously to come out of hibernation and I believe it is absolutely vital for us now to set out the way ahead so that everyone can think and plan for the future – short, medium and long term.

"If the covid crisis has taught us one thing it is that this country needs to be ready for what may be coming and we need to be able to move with levels of energy and speed that we have not needed for generations."

The funding will be used for improvements to major A-roads, including the A58 by Bolton to the A38 running through Somerset.

Projects receiving particularly significant investment include £4.9m to repair two bridges in Sandwell to improve safety for nearby key roads in the West Midlands that will be used heavily during the 2022 Commonwealth Games.

Sheffield will get £4.9m to replace poor-quality footways for pedestrians in Sheffield, as part of the government’s commitment to improve people’s access to ‘active travel’.

The A15 will get £4.5m to improve connections through the Humber region.

Transport Secretary Grant Shapps said: “As the country begins the recovery from Covid-19, we need to get on the front foot and invest in infrastructure in every region to reignite the economy, helping better connect people with opportunities in the future.

“By investing £100m in local roads and reaffirming our commitment to better connecting communities, we are not just talking about levelling up – but making it happen.”

Shapps also announced today that over 50 bids have been received from across the country for a share of the Restoring Your Railways ‘Ideas Fund’.

The Government also announced it will work with devolved administrations to carry out a ‘connectivity review’, looking at how best to improve road, rail, air and sea links between England, Scotland, Wales and Northern Ireland.

Business Secretary Alok Sharma has asked the wider smart transport industry to submit its views on what the UK’s green recovery post-Covid-19 should look like.

The Government has launched a new £200 million support package to help companies continue innovative projects that have been affected by Covid-19.