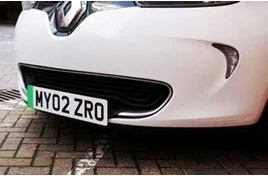 The new number plates can be retro-fitted to any existing vehicles, including cars, vans, buses, HGVs, taxis and motorcycles as long as they emit no CO2 emissions at the tailpipe.

They will consist of a green flash on the left-hand side of the plate and can be combined with the Union flag and national identifiers already permitted by the regulations.

Maclean says that the green number plates build on last month’s announcement to end the sale of new petrol and diesel cars and vans in the UK by 2030.

She said: “Not only will green number plates raise awareness of the increasing number of cleaner vehicles on our roads, they could also unlock a number of incentives for drivers.

“It’s clear there has never been a better time to make the switch to a zero-emission vehicle.”

A survey by Nissan suggests that a third of motorists in the UK would be more likely to buy an EV, because of the new green number plates.

Andrew Humberstone, managing director of Nissan Motor GB, said: “The age of the electric vehicle is now approaching rapidly and these new green registration plates will soon be a common sight on our roads.”

The Nissan survey, carried out by respected pollsters YouGov, found that with the introduction of green number plates, and the prospect of further incentives linked to EV ownership, 32% of people would be more likely to buy an electric car.

A brief statement on Twitter said the name change is "in order to better align with the Government's ambitions to be carbon neutral by 2050".

The Government has given the go-ahead for pure electric vehicles (EVs) to be identified by a green number plate starting from an as yet unconfirmed date this autumn.