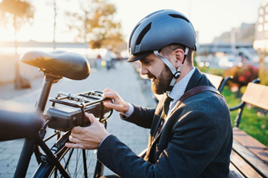 “Gear Change - A bold vision for cycling and walking” will also include new powers for local authorities to fine drivers for motoring offences, cycling training for all and bikes available on prescription.

The Department for Transport (DfT) is looking for at least one small or medium-sized city which wants to create a zero-emission transport system, with extensive bike lanes, an all-electric (or zero-emission) bus fleet, and a ban on nearly all petrol and diesel vehicles in the city centre, with deliveries made to consolidation hubs and the last mile being done by cargo bike or electric van.

The initiative could be done in conjunction with the existing competition for an all-electric bus town, it says.

Other measures as part of Gear Change include offering cycle training for all and bikes available on prescription.

They include new enforcement powers that will allow local authorities, rather than the police, to enforce against moving traffic offences such as disregarding one-way systems or entering mandatory cycle lanes.

Johnson argues that to build a healthier, more active nation, “we need the right infrastructure, training and support in place to give people the confidence to travel on two wheels.

“That’s why now is the time to shift gears and press ahead with our biggest and boldest plans yet to boost active travel – so that everyone can feel the transformative benefits of cycling.”

Elsewhere in the report, it stresses that the Government will no longer fund new cycle route provision on busy roads which consist of painted markings or cycle symbols.

Instead, it wants to see as many as possible of the existing painted lanes upgraded with physical separation. It says that cycles must be treated as vehicles, not as pedestrians.

New cycle provision which involves sharing space with pedestrians, including at crossings, will also no longer be funded. Again, the report says it wants many of the existing facilities to be upgraded with physical separation.

Furthermore, it argues that a quicker way of providing safe, low-traffic cycling is to close roads to through traffic, usually with simple point closures, such as retractable bollards, or by camera enforcement. This, it says, may be useful where the road is too narrow for a separated cycle lane.

However, it stresses that the closure would only affect through traffic. Residents, visitors, or delivery drivers needing to reach anywhere along the road would still be able to do so – though they might have to approach from a different direction. For example, a small number of routes from key suburbs into a city could become bus and cycling corridors, it said.

Transport secretary Grant Shapps says that coronavirus has provided the country with a “once in a lifetime opportunity” to create a shift in attitudes.

“The measures we’ve set out today in this revolutionary plan will do just that. No matter your age, how far you’re travelling, or your current confidence on a bike – there are plans to help and support you.”

To encourage people to continue to take up cycling, cycle training will be made available for every child and adult who wants it, accessible through schools, local authorities or direct from cycle training schemes.

More cycle racks will also be installed at transport hubs, town and city centres and public buildings, and funding will go towards new bike hangars and on street storage for people who don’t have space to keep a bike at home.

Alongside the launch of the strategy, today the first batch of bike repair vouchers worth £50 will be released.

The scheme aims to help more people choose cycling over public transport, with vouchers released in batches in order to help manage capacity across participating stores.

The first 50,000 will be available just before midnight tonight (Tuesday, July 28) on a first come first served basis to those who register online.

Government says it will work closely with industry during this first pilot launch to monitor its success and adapt the scheme as necessary before rolling it out more widely.

He said: "The plans contain many of the things we have been calling for and we are particularly pleased to see active travel put at the heart of the planning process.

"Good quality infrastructure, that integrates with other forms of public transport, will help to lock in the changes we’ve begun to see to travel patterns in recent months and ensure sustainable options are more widely available."

Shirely also said empowering local authorities to deliver improvements to local cycling and walking facilities by providing the support they need to build capacity and capability will be key to delivering the Government’s vision.

He added: "A national scheme to support people to buy an ebike is a welcome move which should help overcome some of the barriers that currently exist to a wider uptake of cycling, especially for longer journeys.”

Manchester and Bradford creating enhanced space for pedestrians and cyclists to enable people to keep their distance for safe essential journeys.