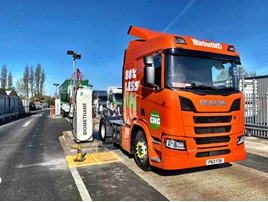 Too much emphasis is being placed on electric HGVs when operators could achieve carbon negative with compressed biomethane (Bio-CNG), provider says.

Philip Fjeld, chief executive officer of CNG Fuels, which specialises in the long-haul HGV sector and whose customers include major brands such as Asda, DHL and Hermes, believes that expectations around electric and hydrogen HGV adoption are not realistic.

He wants the “voice of the CNG industry” to be heard and has joined the Smart Transport membership network to ensure there is a “balanced discussion”.

“Solutions that are available here and now need to be heard and should be part of the discussion,” he said.

Last week the Government launched a consultation into ending the sale of non-zero emission HGVs in the UK, as part of its transport decarbonisation plan.

Fjeld is sceptical about how quickly the market for electric or hydrogen HGVs can develop.

“Until something has been running on the road for between five to 10 years it is not deemed to be mass adoptable so I personally feel that the consultation on HGVs is far too premature,” he said.

Industry won’t adopt if costs are ‘too high’

Fjeld believes the cost of electric HGVs, which can be considerably higher than compressed natural gas (CNG) – in one instance an operator faced paying £400,000 for an electric HGV versus £100,000 for a CNG one as they needed a crane on their vehicle – will prohibit uptake.

“If the vehicles aren’t there at a cost that makes sense, industry is not going to adopt them,” Fjield said.

He also believes electric vehicle charging is a major stumbling block in the long-haul HGV sector as the vehicles need to operate 24/7 and cannot be charged overnight and there is no guarantee that when a driver needs to take a rest break they will be near a charging point.

Having sufficient power at depots and the challenge of putting catenary cables on the motorway network to allow HGVs to recharge (and the associated disruption) are other major issues, in Fjeld’s view.

In contrast, the infrastructure needed for CNG is “just a fuel station”.

CNG currently has nine refuelling stations and is building one every two to three months, which Fjeld acknowledges is “not fast enough”.

From the start of next year this will be ramped up and Fjeld intends to have 18 new stations either opened or under construction within the next 12 months. This will include stations in Scotland, Wales and the north east for the first time.

“That then starts to move the needle because fleets can start to decarbonise because they will have a station nearby,” Fjeld said.

“The growth of the market is being held back at this point in time by the lack of refuelling infrastructure.”

Currently, biomethane’s share of the long-haul HGV sector is only around 1.5% but Fjeld predicts this could grow to as much as 40% by 2030 – provided the uptake of biomethane for HGVs is not “discouraged”.

CNG Fuels has more than 30 fleet customers but expects this to increase to 70 to 80 individual customers next year.

Traditionally, CNG Fuels has attracted large operators with hundreds of HGVs but in the past six months there has been interest from smaller fleets – some with just 10 vehicles – due to a desire to decarbonise, primarily driven by tender document requirements which mean that to win business they need to demonstrate their environmental credentials.

He suggests there is a cost saving of up to 40% when switching from diesel and that the payback period is 1.5 years, based on vehicles doing about 100,000 miles a year.

The typical replacement cycle in the long-haul sector is between three to five years but he does have customers operating CNG HGVs for six or seven years, at which point the “the vehicles have realistically been written down to zero”.

One operator has clocked up one million kilometres (more than 621,371 miles) without any reliability issues.

Fjeld believes the environmental savings from CNG should not be under-estimated.

Typically, there is up to a 84% reduction in CO2 emissions but greater savings are possible.

“There are certain feedstocks that you can produce biomethane from such as manure, which means that the biomethane produced is carbon negative, it gives you greater than 100% savings,” he said.

“There are other feedstocks that give you an 85% savings. As of today, because of the current greenhouse gas accounting methodology that the UK uses, savings that we achieve across our portfolio of biomethane is approximately 90% - diesel versus a gas truck.

“However, we are now sourcing biomethane from manure in increasing quantities and by 2023 customers’ fleets could become carbon negative.”

Fjeld points out that that potentially means were a fleet to then move to electric they would be “going the wrong way”.

He added that he is not against electric or hydrogen but wants to see a more “balanced discussion”.

“We believe that the prudent thing to do is to decarbonise what you can today, using what is available today,” he said.

CNG Fuels has attracted £80 million of investment from Foresight Group to help fund the creation of a UK network of 14 biomethane fuel stations.

CNG Fuels is set to open a biomethane refuelling station for HGVs to support low-carbon deliveries in Wales and the South West.