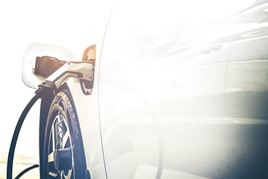 The Government has said the UK is “accelerating further towards a greener transport future” as sales of electric vehicles (EVs) pass the 500,000 mark.

However, the latest figures from the SMMT show that in April battery electric vehicle (BEV) uptake dropped, following cuts to the plug-in car grant.

Monthly BEV uptake had been running at 7.5% of total registrations but fell to 6.5% last month.

Total plug-in vehicle market share broadly followed the trend seen in recent months, however, accounting for just over one in eight vehicles, or 13.2%.

Plug-in hybrids (PHEVs) were more popular than BEVs at 6.8% of the market.

The SMMT now expects BEVs to account for 8.9% of registrations by year-end – down from the 9.3% initially forecast in January, while PHEVs are anticipated to take a 6.3% market share.

Total plug-in vehicles should comprise 15.2% of all cars registered in 2021, it said.

In light of the more upbeat economic outlook on the back of the vaccine rollout and easing of the lockdown restrictions in line with the Government roadmap, SMMT has revised its forecasts for the total new car registrations for 2021 upwards from 1.83 million (based on a snap poll in February) to around 1.86m, a 13.9% increase on 2020.

Demand is likely to be driven by a broad range of new models and powertrains, with confidence bolstered by the gradual reopening of the country, the SMMT said.

Click and collect supported the market for the first week and a half until dealerships could reopen on April 12 – a marked contrast from the same month last year, where Covid-19 restrictions effectively prevented private purchases.

However, April 2021’s consumer registrations were still 14.5% down on the 10-year average.

However, the full impact of showrooms reopening has yet to be realised, given the delay between a customer initially visiting a dealership, deciding on a model and then taking delivery of that new vehicle is normally a number of weeks.

Mike Hawes, SMMT chief executive, said: "After one of the darkest years in automotive history, there is light at the end of the tunnel.

"A full recovery for the sector is still some way off, but with showrooms open and consumers able to test drive the latest, cleanest models, the industry can begin to rebuild.

"Market confidence is improving, and we now expect to finish the year in a slightly better position than anticipated in February, largely thanks to the more upbeat business and consumer confidence created by the successful vaccine rollout.

"That confidence should also translate into another record year for electric vehicles, which will likely account for more than one in seven new car registrations."