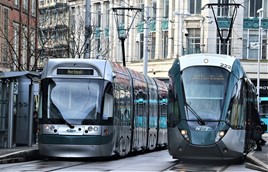 The Department for Transport (DfT) has boosted its financial aid for bus and tram operators in England by a further £256 million to £700m in total.

The extra funding is ahead of the expected increase in use of public transport in September.

Bus services across the country will receive up to £218.4m of support over the next eight weeks, with rolling funding at up to £27.3m per week afterwards, until a time when the funding is no longer needed.

Currently, passenger numbers on bus and light rail services are significantly below normal levels despite the bus network now running at over 80% of normal service levels.

DfT said the funding “will enable operators to mitigate the impact of the loss of revenue, while continuing to build back to normal service levels”.

DfT said the funding has helped to support over 13,000 local bus services across England, outside of London, as at the end of July.

Roads Minister Baroness Vere said: “As we continue to open up the economy more people are using public transport and need sufficient service levels in order to travel safely.

“That’s why we took swift action at the start of this outbreak to ensure that these services were maintained for key workers then and would still be there for people when the economy opened back up.

“This extension of funding pushes our overall support past £700m and means people across the country will have access to the transport services they need.”

In addition to the funding announcement, the Government is also actively working on ways to ensure the bus sector can operate independently and be commercially viable.

The DfT said it will publish a National Bus Strategy to set out how it plans to support the vital sector going forward.

All bus operators in England outside London that previously claimed the Bus Service Operators Grant, as well as operators who run services tendered by Local Authorities, are eligible to claim the new funding and future provisional funding.

Five tram services in the North and Midlands – West Midlands Metro, Sheffield Supertram, Manchester Metrolink, Tyne and Wear Metro and Nottingham Trams – will be supported by the light rail funding, with the money going directly to operators, as with the previous rounds.