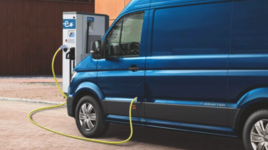 The Government has extended access to the plug-in van and truck grants for an additional two years, until 2024/25.

The announcement comes after the plug-in car and van grant rates were cut and the eligibility criteria was changed last year.

The eligibility criteria for the plug-in car grant was also changed. Cars with a recommended retail price (RRP) of £35,000 or less had been eligible, but that was reduced by £3,000 to £32,000 or less.

Furthermore, hybrid electric cars, which had CO2 emission of less than 50g/km and could travel at least 112km (70 miles) without any emissions, were made no longer eligible.

In terms of the Plug-in Van Grant (PiVG), the grant rate for light commercial vehicles (LCVs) was also cut.

There were no changes to grant rates for vehicles over 3.5 tonnes.

However, alongside announcing the extension to the plug-in van and truck grants, the eligibility criteria for existing plug-in vehicle grants will also be recategorised from the spring with a focus on heavier vehicles.

The Government says it will continue to allow drivers holding standard car driving licences to drive electric goods vans at a higher weight limit, up to 4.25 tonnes (compared to a 3.5 tonne limit for diesel vans).

With the increasing number of large vans on the market, the move will ensure Government targets support where it’s most needed, allowing for heavier and more costly trucks, up to 12 tonnes, to benefit from the higher grant funding, it said.

Industry figures showed the UK had the highest number of plug-in electric vans sold in Europe, and there were around four times as many grant applications compared to 2020.

Existing grants have supported the purchase of more than 26,000 electric vans and HGVs across the UK since the programme launched in 2012.

With nearly 5% of the UK’s CO2 emissions currently coming from vans, ministers say that the two-year extension to these grants and the switch to greener vehicles is essential to support the Government’s climate change and air quality commitments.

Transport minister Trudy Harrison said: “When it comes to clean business, this Government means business. We are backing a generation of green growth for our thriving fleet sector.

“As demand for electric vehicles continues to grow at speed, this extension to our grant scheme will allow tens of thousands more vans to be purchased, transporting goods in a way which is kinder to our environment.

“This will support our vital, ongoing work to clean up our air in towns and cities right across the country and build back greener.”

The Government has cut the plug-in car grant by £1,000 and reduced the plug-in van grant by £500 in order to make remaining funds go further.