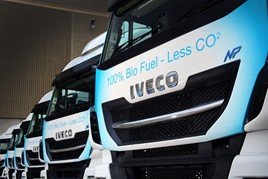 The Gas Vehicle Network (GVN) has said it is ‘extremely disappointed’ with plans to amend the Renewable Transport Fuels Obligation (RTFO) to increase carbon savings on land, air and at sea.

As part of the Department for Transport’s (DfT) ‘Targeting net zero - Next steps for the Renewable Transport Fuels Obligation’, the Government is proposing to increase the RTFO main obligation to supply renewable fuel by 2.5% over the next 10 years.

The RTFO would also be expanded to reward recycled carbon fuels (RCFs). RCFs are fuels produced from fossil wastes that cannot be avoided, reused, or recycled.

Savings would also be made by rewarding renewable fuels of non-biological origin (RFNBO).

The GVN said the UK needs a “more ambitious” RTFO to support the opportunity that gas as a transport fuel offers.

Isaac Occhipinti, head of external affairs at GVN, said: “GVN along with the wider biofuels industry are surprised at the lack of ambition shown by the DfT, especially given other announcements that demonstrate the UK’s leadership in climate change policies.”

“The reality of this lack, or real increase in obligation means we are significantly less ambitious than other European countries, at a time when we are leading with other policies around electrification and decarbonising heat.

“These proposals are not nearly enough to further stimulate investment in this market. And particularly disappointing given the success of the RTFO to date. In 2020 the amount of gas dispensed for HGVs increased by over 78% and early estimates are that over 90% of that is biomethane.”

The DfT opened its consultation on plans to amend the RTFO earlier this month (April).

A recent report by Cadent and Element Energy ‘The Future Role of Gas in Transport’ indicates that biomethane could reduce emissions from HGVs by 38% by 2030. GVN said this needs to “ramp up at a quick rate in order to meet the expected levels of decarbonisation”.

The RTFO reforms would also update the sustainability criteria applicable to renewable fuels and revise the role RTFO will have in maritime shipping by supporting fuels with the highest potential to deliver greenhouse gas savings.

Changes would also require that eligible maritime fuels be derived from renewable energy.

The GVN is one of the seven divisions of the Energy and Utilities Alliance (EUA).

BEIS is to relax planning legislation to make it easier to construct large batteries to store renewable energy from solar and wind farms across the UK.

Transport for London has set out its renewable energy requirements as part of its ambition for a zero-carbon railway by 2030.

The DfT has opened consultation on plans to amend the Renewable Transport Fuels Obligation (RTFO) to increase carbon savings on land, air and at sea.