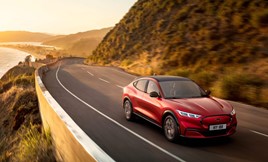 Stuart Rowley, president, Ford of Europe, said: “We successfully restructured Ford of Europe and returned to profitability in the fourth quarter of 2020. Now we are charging into an all-electric future in Europe with expressive new vehicles and a world-class connected customer experience.

“We expect to continue our strong momentum this year in Europe and remain on track to deliver our goal of a six percent EBIT margin as part of Ford’s plan to turnaround our global automotive operations.”

In 2020, Ford and its consortium partners received government backing for the introduction of 5G connectivity to speed up electric vehicle (EV) manufacturing.

Ford also called on the automotive industry and Government last year, to work in partnership to boost adoption rates of plug-in vehicles with a clear strategy for incentives and infrastructure.

Spearheading Ford’s advance into an all-electric future is a new $1 billion (£720m) investment to modernise its vehicle assembly facility in Cologne, Germany, one of its largest manufacturing centres in Europe.

The investment is set to transform the existing vehicle assembly operations into the Ford Cologne Electrification Centre for the manufacture of electric vehicles (EVs), Ford’s first such facility in Europe.

Ford also confirmed that its first European-built, volume all-electric passenger vehicle for European customers will be produced at the facility from 2023, with the potential for a second all-electric vehicle built there under consideration.

The announcement from Ford follows the launch of Jaguar Land Rover’s new strategy to make Jaguar an electric-only car brand within four years.

Ford is calling on the automotive industry and the Government to work in partnership to boost adoption rates of plug-in vehicles with a clear strategy for incentives and infrastructure.

Ford and its consortium partners have received government backing for the introduction of 5G connectivity to speed up electric vehicle manufacturing.

Ford and Smart Transport member ALD Automotive will work on new mobility services and solutions as part of a new joint venture.