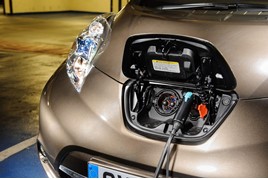 Power cuts could be seen in parts of the country, unless electric vehicle (EV) charging habits change or the National Grid is strengthened, MPs on the transport committee have warned.

In the report, Zero emission vehicles, MPs have set out a series of recommendations to Government to boost the production and purchase of EVs.

The report questions whether the Government’s transport decarbonisation plans, are enough to deliver the public charging infrastructure needed across all regions of the UK.

Drivers who live in rural or remote areas or who do not have off-street parking, for example, are at risk of being left behind, according to the report.

MPs say that a 'clear policy framework' is 'essential' to ensure that industry can deliver the vehicles and charging infrastructure required to deliver the Government’s net zero ambition.

Huw Merriman MP, chair of the transport committee, said: “Putting guarantees in place on infrastructure is crucial, but one report after another flags concerns to Government about the provision of electric car charging infrastructure.

“Let ours be the last; it’s time that ministers set out the route map to delivering a network of services for everyone across the UK.”

The Competition and Markets Authority (CMA) has also warned that some parts of UK’s charging infrastructure are facing problems which could impact the Government's target.

The transport committee states that the Government must work with the National Grid to map national coverage to eradicate ‘not-spot’ areas and identify locations where the Grid will not cope with additional usage.

It should also make public charge provision a requirement of local development and provide funding for local planning and transport bodies to hire staff with a mandate to deliver charging infrastructure.

Furthermore, it suggests that it needs to protect the consumer from excessive charges and multiple accounts when charging in public and address the discrepancy between the 5% VAT incurred for home charging and 20% VAT for on-street.

The report insists that industry uses price to change consumer charging behaviour to a ‘little but often’ approach and at times when the National Grid can meet total demand.

MPs are also calling on the Government to introduce a zero-emission vehicle (ZEV) mandate as a matter of priority if it is to hit its target of 100% ZEVs by 2035.

A ZEV mandate would incentivise car manufacturers to steadily increase sales of zero emission vehicles towards the 2030 target for all new vehicles to have ‘significant zero emission capability’.

This, it says, would bring ZEV vehicles within reach of more consumers encouraged by cost-effective ways to support purchases compared to taxpayer-funded incentives.

Merriman said that the Government's inclusion of a ZEV mandate is welcome but 'not enough' on its own.

He said: “Charging electric vehicles should be convenient, straightforward and inexpensive and drivers must not be disadvantaged by where they live or how they charge their vehicles.

“Shifting the subsidy from the taxpayer to the manufacturer will incentivise those who deliver the fewest electric vehicles in our showrooms to up their game.

“Unless the National Grid gains more capacity, consumer behaviour will have to alter so that charging takes place when supply can meet the additional demand. The alternative will be blackouts in parts of the country.

“We also cannot have a repeat of the broadband and mobile ‘not spot’ lottery which would mean those in remote parts cannot join the electric vehicle revolution.”

Jack Cousens, head of roads policy for the AA, says that for most drivers, the opportunity to charge an EV in their garage, on their driveway or in a dedicated parking space offers cheaper running costs.

However, he said: “For the 30% of homeowners with no access to dedicated off-street parking or workplace charging, they have no choice but to pay the rates set on the public charging network.

“On the road to electrification, we cannot allow one group of drivers to benefit while others struggle – in effect, a two-tier system of have and have-nots.

“An independent body overseeing the fees being charged on the public network would help reassure drivers that they are paying a fair price.

“Rather than focusing on tying manufacturers up in red tape to meet EV sales targets, we need to improve the incentives offered to consumers to buy electric vehicles.

"Scrapping VAT would be the most influential policy to help spark the electric revolution.”

Ben Fletcher, associate director of EV at energy technology company, Moixa, said: “We welcome this report into zero emission vehicles and the roadmap of actions recommended by the Government which provides more clarity on how the UK will achieve its 2035 target.

“In order to support these ambitions, it's crucial that customers find it easy and rewarding to access the greenest and cheapest energy when charging their vehicles.”

Alfonso Martinez Cordero, MD of LeasePlan UK, calls for local authorities to play their part in supporting the development of the UK's charging network.