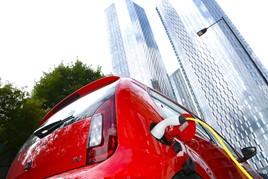 Demand for ultra-low emission vehicles increased by 113% to 230,700 units  in July in Europe, according to the latest data from JATO Dynamics.

This first time that these vehicles were bought by more than 200,00 consumers in a single month.

Felipe Munoz, global analyst at JATO Dynamics, said: “The rise in demand for EVs is strongly related to a wider offer that is finally including more affordable choices.

“The higher competition among brands is also pushing down prices.”

Half of these cars were powered by a hybrid engine (HEV), with demand soaring by 89%.

The mild hybrid versions of the Ford Puma and Fiat 500 contributed to this result.

Registrations jumped from 23,400 units in July 2019 to 53,200 just one year later, and the offer increased from 28 different models available to 38. New models like the Peugeot e-208, Mini Electric, MG ZS, Porsche Taycan and Skoda Citigo buoyed the figures.

Tesla posted a 76% decline to 1,050 units following shipping delays to Europe, as a consequence of production challenges in its Fremont, California plant.

Munoz said: “In contrast to the general trend of increasing demand for electric cars, Tesla is losing ground this year in Europe.

"Some of this can be explain by issues relating to the production continuity in California, but also by high competition from brands that play as locals in Europe.”