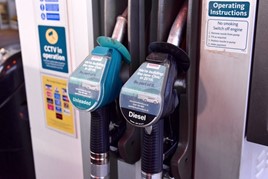 The EU Parliament has voted to back a European Commission proposal for a ban on the sale of new petrol and diesel cars from 2035.

The plans were unveiled last year and seek a reduction to zero CO2 emissions from new cars sold in the bloc by 2035.

It accelerates the EU’s previous plan, which targeted a 37.5% reduction by the end of the decade.

Passenger cars account for about 12% of total EU CO2 emissions, so curbing that output is key to achieving the bloc’s overall climate goals of reaching “net zero” by 2050.

The measure received strong opposition, with some EU lawmakers pushing for a weaker 90% reduction in CO2 emissions by 2035. This, along with proposals to allow the sales of hybrid vehicles to continue beyond 2035, were rejected.

Following the vote, which took place on Wednesday June 8, the EU parliament will begin negotiations with EU countries on the final law, which is expected to be agreed in the autumn.

Once passed, the law is expected to speed up Europe’s shift to electric vehicles and encourage carmakers to invest more heavily in electrification. Additional laws to improve charging infrastructure will support this.

Car makers, including Ford, Volvo and the Volkswagen Group, have already made commitments to only sell electric cars by 2035.

Alex Keynes, clean vehicles manager at T&E, added: “The deadline means the last fossil fuel cars will be sold by 2035, giving us a fighting chance of averting runaway climate change. Phasing out combustion engines is also a historic opportunity to help end our oil dependence and make us safer from despots. And it gives the certainty the car industry needs to ramp up production of electric vehicles, which will drive down prices for drivers.”