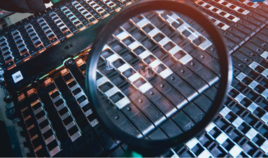 Green group Transport & Environment (T&E) has warned that weakened EU battery recycling targets would be a blow for the environment and could even increase future production costs.

Environment ministers have said they want to delay the introduction of battery recycling targets.

Governments want a requirement for battery makers to recover 35% of all lithium in used batteries to apply in 2029 – three years later than the EU Commission proposed.

"Europe’s battery industry cannot wait until 2029 to start building up a domestic supply of critical metals.

"Strong recycling targets will help improve Europe’s strategic autonomy by establishing a secure domestic supply of raw materials, and will cut the costs of batteries needed to power the green transition.”

Governments also said mandatory checks for human rights and environmental abuses in the battery supply chain should be pushed back two years to 2026.

But they agreed with the timeline proposed by the Commission to begin introducing limits on the carbon footprint of battery production in 2024, giving a further boost to the climate credentials of electric cars.

Pivot Power has activated a 50MW/50MWh battery energy storage system at its Kemsley site in Kent to help support a decarbonised electricity system.