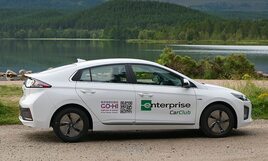 Parked in dedicated bays close to other transport modes, the vehicles will enable people to use Go-Hi to book and plan travel for parts of a trip that are only possible by car.

Smart Transport member, Enterprise, is one of the founding partners in Go-Hi.

It launched in June and received additional funding in July from the Scottish government’s Mobility as a Service (MaaS) Investment Fund to improve access to transport across Scotland.

Murray McAdam, business rental sales manager for Scotland at Enterprise, described the move as "an important step in creating ‘mobility hubs’ around existing transport services in the Highlands and Islands".

“Local residents, business travellers and tourists alike can now quickly switch to a rental vehicle after taking a train, ferry, bus or plane, making their onward journey much more straightforward, especially to places that can only be accessed by car.”

The vehicles can be booked from £5.90 per hour using the Go-Hi app and can be picked up from on-street bays and opened using a smartphone.

Enterprise Car Club said it currently has 260 low-emission on-street vehicles across 18 towns, cities and communities across Scotland, providing automated, on-demand rental by the hour or day.

Enterprise has 27 branches across Scotland, with more planned for later in the year, including three branches in the Highlands and Islands region.

The company said the expansion highlights its investment in Scotland to provide flexible and sustainable motoring, following the recent addition of 30 Renault Zoe electric cars into its daily rental fleet across the country.

McAdam added: “The expansion highlights Enterprise’s continued investment in Scotland to provide flexible and sustainable motoring, following the recent addition of 30 Renault Zoe electric cars into its daily rental fleet across the country.”

Go-Hi has been developed by HITRANS, the regional transport partnership, in association with the Mobilleo MaaS platform.

The Scottish Government has launched the second and final round of its Mobility as a Service (Maas) Investment Fund, with £1 million available.

Two-thirds (66%) of personal vehicle owners and eight in ten (82%) lessees are willing to give up their vehicles in favour of mobility as a service (MaaS), over the next 10 years.

Enterprise has been selected as the car rental partner for the GO-HI mobility as a service (MaaS) project in the Highlands and Islands region of Scotland.