Engie to roll out charging infrastructure for Biffa UK 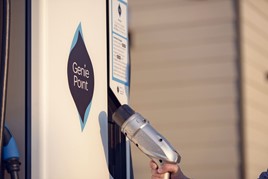 The deal is an extension to the fully integrated facilities management service that Engie has been providing to Biffa since February 2018.

The 14 chargers are part of the initial deal and include Alfen EV chargers (six single and eight dual socket), which will be a combination of 22kW twin socket load balanced units as well as some single and dual socket 7kW units.

The chargers will all be operated and managed by Engie’s GeniePoint Platform.

In addition, Biffa says that all company car drivers will be encouraged to make the switch from petrol or diesel-powered vehicles, to battery electric vehicles (BEVs).

The installation of new chargers will support the fuelling of all these vehicles at Biffa sites, but the partnership will also give drivers access to the wider nationwide public GeniePoint charge point network when travelling around the country.

As the uptake of electric company cars increases due to favourable benefit-in-kind (BIK) tax bills and increasing vehicle availability, the June digital edition of Fleet News examines how it will become more important for organisations to introduce charge points at workplaces.

Biffa has been successfully trialling the use of electric powered Refuse Collection Vehicles (RCV), this trial showed an overall reduction in diesel usage of over 9,000 litres for just one vehicle over a six-month period.

The installation of GeniePoint Network chargers at their refuse collection sites ensures the migration to all Biffa vehicles operating with cleaner fuels can be supported ensuring the best route for fleet resources whilse minimising the environmental impact on the towns and cities in which Biffa operates, it said.

Mark Robson, head of procurement, Biffa, explained: “In order to meet the current and future demands for vehicle charging, it was essential that Biffa found a reliable, experienced and cost-effective partner to deliver an effective solution.

“In Engie we have found just that partner and we are very much looking forward to working with them to expand our coverage of charging points to support both front line vehicles and other company vehicles.”

Alex Bamberg, managing director, Engie EV Solutions, added: “Biffa is clearly demonstrating its commitment to cleaner air and reduced carbon output across all aspects of its business. Engie are ideally placed to support these efforts by providing the latest in EV charging technology in a scalable solution to support future growth as it transitions to zero carbon transport in the coming months and years.”

More electric vehicles (EVs) and smart chargers could have saved the National Grid up to £133 million during the lockdown period, according to members of the Flexibility First Forum.

The Crown Commercial Service (CCS) is supporting the drive towards a lower carbon economy by making it easier for the public sector to buy electric vehicle (EV) charging infrastructure.