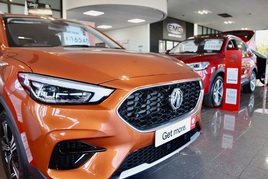 Battery electric vehicles (BEVs) took 18.8% market share for UK new car registrations in November, according to the latest data from the Society of Motor Manufacturers and Traders (SMMT).

Year-to-date, 1,538,585 new cars have been registered, of which 17.5% have been BEVs or PHEVs, meaning one in six new cars is capable of being plugged in.

When combined with hybrid electric vehicles (9.0% share), more than a quarter (26.5%) of the new car market during 2021 has been electrified.

MG Motor UK recorded a huge 383.1% sales increase in the same month that its new ZS EV arrived in showrooms.

Much of the success was driven by the brand’s plug-in models, with MG having the highest battery-electric (BEV) mix of any manufacturer selling a mix of traditional and alternative fuel cars.

However, compared to the pre-pandemic average, the market remains down significantly, with 31.3% fewer vehicles registered during the month.

Mike Hawes, chief executive of the SMMT, said: “The continued acceleration of electrified vehicle registrations is good for the industry, the consumer and the environment but, with the pace of public charging infrastructure struggling to keep up, we need swift action and binding public charger targets so that everyone can be part of the electric vehicle revolution, irrespective of where they live.”

Despite this uptake in demand for plug-in vehicles, new SMMT analysis this month revealed that the pace of on-street public charging infrastructure rollout is lagging, with the number of plug-in cars potentially sharing a public on-street charger deteriorating from 11 to 16 between 2019 and 2020 and just one standard on-street public charger installed for every 52 new plug-in cars registered over the course of this year.

Britain’s ratio of plug-in vehicles on the road to standard public chargers (16:1) was one of the worst among the top 10 global electric vehicle markets at the end of 2020.

With plug-in vehicle uptake having grown by 86.6% in 2021, SMMT is calling on the Government to take action to avoid the ratio deteriorating further, by boosting the provision of public charging points through the imposition of binding targets.

The ratio of electric vehicle charge points to plug-in cars deteriorated by almost a third (31%) during 2020, according to new research from the SMMT.

Government to go all electric with its vehicle fleet by 2027

The Government has committed to switch all of its own vehicles to zero emissions by 2027.