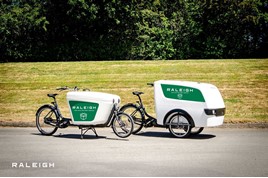 Electric bikes have an important role to play post-Covid-19, bringing benefits to businesses and individuals, according to Ed Pegram, business manager at Raleigh UK.

Currently, only 2% of mileage accumulated in the UK is made by bike (cars account for 77%) and “things need to change”, Pegram told delegates at the recent Virtual Smart Transport Conference.

“There's going to be a huge demand for individual transport, particularly for short journeys.

“And the electric bike could play a huge part in that in terms of more forward thinking and future sustainability.”

He suggested that better infrastructure on rail services could mean that more people do first and last mile journeys by bike, while for those employees working from home, a bike could help address the challenge of keeping active and bring benefits for mental health.

Rayleigh has introduced nearly 7,000 bikes in Birmingham over the past six years and that has contributed to nearly 8,000 people (children and adults) learning to ride.

“There are huge health benefits to that,” Pegram said.  “The average person that chooses to commute on foot or by bike takes one less sick day per year.”

He also highlighted the potential of electric cargo bikes for urban logistics, with goods taken to an out of town hub and an electric cargo bike used as a zero emission, last mile delivery solution. This could have “huge benefits” for air quality in towns and cities, according to Pegram.

He suggested that for businesses struggling financially post-Covid, electric cargo bikes could offer a cheaper alternative to commercial vehicles, particularly in light of parking levies and low emission zones being introduced in cities.

“They won't replace every commercial vehicle for every journey but there's a huge amount of research that suggests around 25% of the journeys made by commercial vehicles, particularly in towns and cities, could be replaced with e-cargo bikes,” Pegram said.

Rayleigh is supporting Nottingham City Council with a range of bikes which are available on short-term loan to small businesses across the city region. The bikes can do 40 miles on a single charge and carry around 100 kilos in weight, with a capacity of about 750 litres.

“There's more space now dedicated to walking and cycling and so users definitely would feel more comfortable on an e-cargo bike where previously that might not have been the case."

He added: “We're at a time where we need to think 20 years in the future, rather than just short-term.”