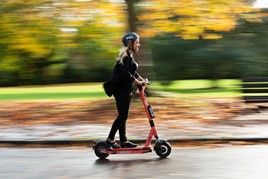 E-scooters have replaced an estimated 370,000 car trips and saved 200 tonnes of CO2 emissions in the West of England, according to operator Voi.

Since the trial began in October last year, more than one million rides (more than three million kilometres) have now been clocked up.

The majority of rides are taking place in the city centres as people are using them to shop, run errands and go about their daily lives.

Train stations are one of the most popular locations to start and end rides, suggesting that riders are using Voi’s service to complement public transport journeys.

E-scooters were introduced in the West of England, including in Bath, Bristol and South Gloucestershire, to reduce pressure on public transport and offer residents a sustainable, convenient and affordable way to travel around instead of using a car.

Nick Piggott, a Voi user from Bristol, said: “Voi e-scooters make it easier to travel around. People opt for using a Voi instead of driving. It saves a lot of space and helps the environment.”

As part of the trial, the West of England Combined Authority area was the first place in the UK to offer residents both the Voi hop-on-hop-off and the long-term rental options.

So far, more than 650 people have applied for the long-term rental scheme, and currently, nearly 400 people have taken it up.

Voi’s long-term e-scooter rentals can be used by residents across the whole of Bath and North East Somerset, Bristol and South Gloucestershire, giving them unlimited access to a scooter they can use to travel in the West of England region.

While the lockdown was in place, Voi offered free rides to NHS staff and key emergency workers, and more than 120,500 rides were taken for free in the region, with more than 4,000 users taking advantage of the full discount.

Voi also offers discounted rides to vaccination centres and continues to offer discounts for students and those on a low income.

Jack Samler, general manager at Voi UK and Ireland, said: “People in the West of England have embraced Voi’s e-scooters, whether it’s for riding to work, running errands or visiting friends and family.

"E-scooters have the potential to change the way we move around our cities and towns, and our mission is to help to create cities that are better and healthier places to live.”

Voi said that it continues to educate its riders with online and in-person safety training events where it distributes free helmets to riders. Recently the micromobility operator made its three-strike policy stricter, and users who do not follow the e-scooter usage rules will see their accounts blocked temporarily or permanently. Residents are also encouraged to report instances of anti-social behaviour or misuse via this page.

Supt. Simon Brickwood, of Avon & Somerset Police’s Roads Policing Unit, said: “We’re keen for riders to be aware that e-scooters are subject to the same road traffic legislation as cars or mopeds and are only legal for use as part of government-led trial schemes. While they may not be capable of high speeds, irresponsible e-scooter use puts pedestrians, motorists and the riders themselves at risk.

“However, whilst we are have seen some limited incidents of poor rider behaviour, these represent a small minority of e-scooter users, with the vast majority complying with the rules. Working closely with the local authority and Voi, we are actively engaging with e-scooter users as part of our regular patrols and issuing safety advice where appropriate.”

New training modules are available to help support safety for users of e-scooters and e-bikes.