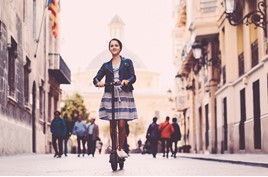 Dashcam provider Nextbase has analysed worldwide data from a variety of sources on the number of e-scooter accidents.

It predicts that the number of e-scooters in the UK will reach one million by the end of the year and that one in five e-scooter riders will be involved in an accident.

Trials of rental e-scooters are currently taking place across 32 areas in England and the Government is not expected to make a decision on whether or not to permit the use of privately-owned e-scooters on public roads until after the trials complete next year.

Despite being illegal to use on public roads, sales of privately-owned scooters have soared.

E-scooters have the potential to help the UK decarbonise transport but have been criticised by some over their misuse and have caused concern for disability groups.

Earlier this week the UK’s National Federation of the Blind delivered a petition to the Government asking for all hire schemes to be stopped.

Nextbase is advising motorists to protect themselves from unlicensed and uninsured e-scooters by capturing footage from their vehicles.

Video evidence is accepted by all UK police forces and insurers, and could be the only proof in case of an e-scooter incident, it advised.

Bryn Brooker, head of marketing and road safety  at Nextbase, said: “It will come as no surprise that we have seen an increase in the amount of serious e-scooter collisions from our dashcam users.

"We suggest that motorists take extra time to check their surroundings before they make any manoeuvres, always give e-scooter riders at least 1.5 metres of space when overtaking, and do not alarm them by beeping your horn or speeding up, this is likely to cause riders to lose concentration.

“We recommend that drivers use dashcams to capture any incident involving an e-scooter. This footage is accepted by all UK police forces and major insurance companies as proof of liability, helping protect motorists’ claims where there is a collision with an uninsured e-scooter.”

Victoria Bristow, part of the road safety team for West Mercia Police, said: “Although e-scooters are available to buy, they are currently illegal to use on public roads, pavements, cycle lanes and pedestrian-only areas unless part of an approved Government trial taking place in some urban areas.

"Electric scooters are currently classed as ‘powered transporters’ by the Government and fall under the same laws and regulations that apply to all motor vehicles in terms of requiring insurance, tax, MOT, license and registration.

“There is currently no mechanism in place to obtain any of these for e-scooters, so as this requirement can’t be met, their use in public areas is illegal. As they fall under the same laws as motor vehicles, anyone found using them in public areas risks having the e-scooter seized by the police.”

CEO Paul Hodgins told Smart Transport earlier this month that fewer than five serious incidents have been reported to Ginger, which, he said, “compares favourably to cycling”.

He urges critics to remember that “you have to be realistic about what happens on the roads”.

Transport for London (TfL) and London Councils have announced an expansion of the capital’s trial of rental e-scooters.