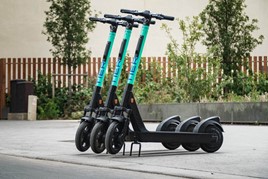 The Government has extended the end date of e-scooter trials until March 31, 2022, meaning it could be mid-2023 before any legislation permitting their use is introduced, the Times has revealed.

Rental e-scooters are currently being trialled in 50 cities across the UK and the Government is not expected to make a decision on whether or not to permit the use of privately-owned e-scooters on public roads until after these trials complete.

It told the Transport Committee last year that understanding the positive and negative impacts of e-scooters from the data and evidence of current on-road trials will be key to the decision about whether they will be legalised.

The trials were due to complete this year. However, the Department for Transport told the Times earlier this week: “To ensure we get the most comprehensive evidence from trials, including those that have started more recently, the end date for trials has been extended to March 31, 2022.”

Richard Adely, the CEO of e-scooter manufacturer Taur, told the paper that the Government’s “dithering and delay has allowed more and more unregulated and out-of-control scooters to proliferate on streets, risking the life and limb of pedestrians and other road users”.

Last week, figures were published showing more than 70 people have been injured during the nationwide trials of e-scooters, with 11 of those injuries labelled “serious”.

It has also been revealed that a number of crimes including robbery and assault are being committed with the aid of e-scooters, and there are concerns about pavement use of e-scooters and the impact on disabled people.

However, MPs on the Transport Committee say that e-scooters have the potential to offer a low cost, accessible and environmentally friendly alternative to the private car and support their introduction.

The committee has made a number of recommendations about how to ensure that any regulations governing e-scooters are effective in providing a safe environment for both riders and other road users.

E-scooters are already legally used in a number of other countries across the world and last week the Irish Government’s said it would prioritise the legalisation of e-scooters in its summer session legislative programme.

Transport Committee calls for e-scooters to be legalised

MPs on the Transport Committee are calling for the Government to legalise e-scooters to help reduce congestion.