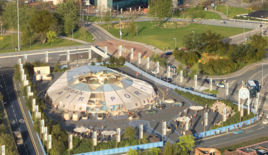 Coventry's drone and flying taxi Urban-Air Port has today opened for around a month to provide a blueprint for more than 200 vertiports planned worldwide over the next five years.

Ricky Sandhu, founder and executive chairman of Urban-Air Port, said: ““The opening of Air-One is a momentous moment – the starting gun for a new age of transport, an age of zero-emission, congestion-free travel between and within cities that will make people healthier, happier and more connected than ever before. Cars have roads. Trains have rails. Planes have airports. Now, eVTOLs (electric Verticle Take-Off and Landing vehicles) have an Urban-Air Port.”

The urban air mobility market is forecasted to grow by 9% annually, reaching US$1 trillion in the next 20 years.

Commercial flights are expected to begin this decade, including Supernal’s flying taxi which enters commercial operations in 2028.

According to McKinsey, some flight operators could see passenger numbers reach 70,000 per day as early as 2030, while Urban-Air Port predicts its global passenger numbers could reach up to 28 million a year within the next five years.

Urban-Air Port vertiports will provide the ground infrastructure to support this new market. Last month, those behind the initiative releaed the video below to show how the site will work

Urban-Air Port wants to unlock a future ‘lifestyle retail experience’ that integrates retail into travellers’ physical journey from A to B via a unifying smartphone app.

The app will enable travellers to plan their journey, engage with brands associated with Urban-Air Choice and integrate with other forms of transport.

For example, someone could rent an e-scooter, travel to an Urban-Air Port, take an air taxi across a city, order a coffee on route and have it waiting at an Urban-Air Café at their destination, all controlled from the palm of their hand.

Air-One will demonstrate aircraft command and control, eVTOL charging, cargo loading for unmanned drones, and will host demonstrator flights. West Midlands Police and Skyfarer will be among the first to operate flights from the site, showcasing how Urban-Air Port’s vertiports can provide drone bases for “sky protection” and high-value cargo deliveries in the near future.