Councils get new powers to monitor cycle lanes in England

Local authorities in England will have new powers to use CCTV to issue penalty charge notices to enforce cycle lanes from June 22.

Cars parked on cycle lanes pose problems for cyclists, often forcing them into the flow of traffic.

With approved camera devices, it will be easier for those local authorities with civil parking enforcement powers to take action against cars illegally parked on mandatory cycle lanes, allowing cyclists to complete their journeys without deviating from their path.

Cycling Minister Chris Heaton-Harris said: “Across the country there has been a surge in the number of people dusting off their old bike from the back of the shed and cycling, or taking journeys on foot, to get from A to B.

“These new measures also build on our recent £2 billion investment to create a green, healthier legacy and see more people travelling by bicycle or on foot.

“This measure will help get more cyclists on the road and alleviate pressure on public transport infrastructure, giving people the confidence to use their bike for more journeys – perhaps for the first time.”

The £2bn billion package for cycling and walking was announced last month to help create a greener transport network.

This included £225 million for local authorities in England to create pop up cycle lanes with protected space for cycling, wider pavements, safer junctions, and bike and bus-only corridors.

The Government also recently announced a bicycle repair scheme, where up to half a million £50 vouchers will be issued to people in England to help repair their bicycles and get them back on the road. 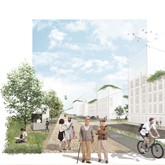