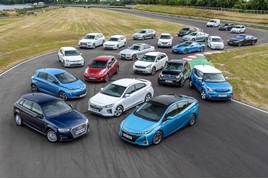 COP26 president and Secretary of State for Business, Energy and Industrial Strategy Alok Sharma has said the pace of electric vehicle adoption needs to double globally in order to meet decarbonisation targets.

Sharma made a speech as part of an online meeting on April 27 as part of the first day of the Petersberg Climate Dialogue.

The UK, as incoming presidency for the UN Climate Change Conference (COP26), is co-hosting the Dialogue with Germany.

As part of his speech, Sharma said: “By the most optimistic estimates, over half of new car sales globally will be electric vehicles by 2040.

“To meet the Paris Agreement goals, we probably need all new vehicles to be zero emission by then.

“In other words, we’re going to need to double the pace of the global transition.”

The UK has already set the goal of ending the sale of new petrol, diesel and hybrid cars and vans by 2035 or earlier.

Sharma said the UK has also invested in a UK Battery Industrialisation Centre that will act as a stepping stone to its larger commitment for a Gigafactory – a large-scale battery technology factory for electric vehicles.

He said: “The more countries that set clear targets and policies in line with this rapid transition that I’ve talked about, the faster investment will shift towards new technologies, and the faster their costs will come down.

“We’ve seen that in renewables and we want to see that when it comes to vehicles as well.”

The eleventh annual Petersberg Climate Dialogue is the first major climate ministerial meeting of the year, bringing together ministers from 35 countries within the United Nations Framework Convention on Climate Change (UNFCCC).

The next COP26 UN climate change conference was set to take place in Glasgow in November but has been postponed to an as yet unconfirmed date next year due to COVID-19.

The organisers said dates for a rescheduled conference in Glasgow next year will be set out in due course following further discussion with parties.

Can everyone be a winner with transport and technology?

Stephen Joseph says decision-makers must take care to ensure the technologies they introduce will contribute to, rather than undermine, policies