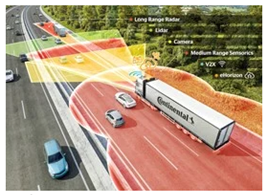 It is working with braking components manufacturer Knorr-Bremse on the technology, which is capable of driving trucks autonomously under almost all circumstances without the need for direct human intervention, although intervention is still possible.

Dr Georg Fassler, Continental’s vice president commercial vehicle products and systems, said: "It cuts the need for drivers, who in any event may not want to drive long distances anymore.

"We're talking about the ability to enter and leave motorways, change lanes and overtake other vehicles.

“The next steps will involve manoeuvring in confined areas - inside transport depots for example - and tackling distribution-hub-to-distribution-hub runs.”

That will eventually be followed by employing Level 4 technology in busy urban areas.

Achieving this level of sophistication means among other things that a vehicle has to have a comprehensive 360-degree view of its surroundings using a mixture of cameras, radar and laser-based LiDAR (Light Detection and Ranging) scanners.

It is one aspect of what Fassler refers to as environmental perception.

It includes the ability of trucks to for example look beyond the line of sight using systems such as Continental's eHorizon or detect an object and figure out what it is. Increasingly it may also mean vehicles being capable of working out whether a pedestrian is about to step off the payment and walk in front of them, and reacting accordingly.

"It's about more than putting a few sensors on a truck though," said Fassler.

“With an artic the way in which the cab pitches and rolls, the different trailers which may be coupled to the tractor unit, and the risk of sensors being obscured as the trailer turns are all factors that need to be taken into account.”

Another consideration is the ability of the tractor unit to 'see' what is directly behind the trailer and how quickly the message can be transmitted. "It can't take more than 200 milliseconds," added Fassler.

"You need a lot of onboard computing power to get all these sensors working together.

“You've also got to have a high degree of in-service reliability plus a back-up system which means that if one control unit fails, the truck can immediately switch to another."

Widespread adoption of Level 4 may still be sometime away. UK Government and industry body Zenzic believes that heavy commercials equipped with the technology will not appear on British highways in significant numbers until towards the end of the next decade.

In the meantime, trucks will increasingly adopt some of the safety systems already being employed on light commercials, says Fassler.

"I'm talking about automatically steering the truck back into the correct lane if the driver starts to wander, reminding him of the speed he should be doing and in future automatically reducing the speed if necessary," he said.

Further innovations that go beyond the systems found on vans could include the brakes being applied automatically when a truck is about to turn if sensors detect the presence of a vulnerable road user in the danger zone.

Likely to be installed too are devices that will trigger an alert if the driver is showing signs of being distracted, tired, or feeling unwell. More data is likely to be generated by eHorizon covering areas such as traffic congestion, and whether the highway ahead is becoming icy.

Onboard safety systems look set to proliferate as the European Union's General Safety Regulation expands its remit. That is no bad thing in Fassler's opinion.

"New perception functions can reduce road fatalities," he concluded. "That means fleet costs are reduced too."

Nissan's Sunderland plant will trial the use of self-driving 40 tonne trucks to deliver assembly parts as part of a proof-of-concept future logistics project.

Almost all (96%) passengers that took part in an autonomous vehicle as part of a London trial said they trusted the technology guiding the way.

Oxbotica has paved the way for expansion its in right-hand drive markets after gaining approval to start public autonomous driving testing in Germany.