Consultation launched to give combined authorities more powers over roads 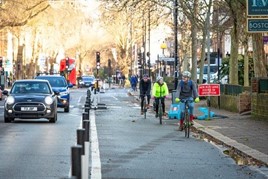 A consultation has been launched to grant mayors and their combined authorities greater decision-making powers and accountability for Key Route Networks (KRNs).

The consultation, launched by the Department for Transport (DfT), includes proposals on providing mayors with additional highway management powers and with sole or concurrent highways powers over the KRN.

The consultation also proposes giving mayoral combined authorities the ability to delegate highway powers to local authorities, providing mayors with the power to direct a local authority to deliver schemes agreed in their local transport plan.

Giving mayors or constituent local authorities the ability to request responsibility for a route by order of the transport secretary, also forms part of the proposals.

Transport for London (TfL) has responsibility for their equivalent of KRNs, Greater London Authority (GLA) roads (also known as ‘red routes’ or the Transport for London Road Network (TLRN) and the provision of a fully integrated public transport network.

The consultation argues this is not the case for England’s other city regions but is an option which should be available to every city region.

Outside London, mayors of combined authorities have responsibility for strategic transport but only limited highway powers over their KRNs.

In July 2020, the Government committed in Gear Change, the Prime Minister’s cycling and walking plan for England to consult on increasing the powers of mayors over their KRNs, with a view to enabling a more integrated and holistic approach across MCAs to the allocation of road space and new infrastructure, supporting improved traffic flow and more new cycling and walking infrastructure.

A recent report by the DfT reviews the plan a year after publication.

In addition, the Bus Back Better national bus strategy for England published in March 2021, sets out the need for Bus Service Improvement Plans to explain how traffic management and investment are used to prioritise buses.

The consultation will run until September 24, 2021.

'Gear Change: A bold vision for cycling and walking' sets out the Department for Transport's plans to revolutionise active travel.

Transport for West Midlands (TfWM) has published a green paper to drive engagement on what its new local transport plan (LTP) should look like.

Report by the Department for Transport (DfT) reviewing the walking and cycling plan for England, Gear Change, a year after publication, July 2020.